SEOUL — North Korea on Thursday threatened to attack American military bases in Japan and on the Pacific island of Guam in retaliation for training missions by American B-52 bombers over the Korean Peninsula, while state radio blared air-raid warnings to the North Korean people.

Until the 1990s, air-raid drills had been a popular tool for the North Korean regime to highlight the perceived threat of an American invasion and to instill in its people a sense of crisis and solidarity. The one-hour air-raid drill on Thursday came amid heightened tensions on the Korean Peninsula after the North’s nuclear test on Feb. 12 and the subsequent United Nations sanctions against the North.

Nuclear-capable B-52 bombers, taking off from Guam, had previously flown missions over South Korea as part of joint military exercises. But this month, the Pentagon took the rare action of publicly announcing those missions to reaffirm the United States’ “nuclear umbrella” for South Korea and Japan at a time of rising anxiety over the North’s nuclear threats. South Korean news media also carried photos of an American nuclear-powered attack submarine making a port call at a South Korean naval base.

“The U.S. should not forget that the Anderson Air Force Base on Guam, where B-52s take off, and naval bases in Japan proper and Okinawa, where nuclear-powered submarines are launched, are within the striking range of the DPRK’s precision strike means,” a spokesman of the Supreme Command of the North Korean People’s Army told the state-run Korean Central News Agency on Thursday.

He added, without elaborating, “Now that the U.S. started open nuclear blackmail and threat, the DPRK, too, will move to take corresponding military actions.”

Separately, North Korea said on Thursday that it would convene its Supreme People’s Assembly on April 1. The rubber-stamp Parliament, which usually meets once a year, endorses government budgets, policies and personnel reshuffles ordered by the top leader, Kim Jong-un.

One of the two joint American and South Korean military exercises that have infuriated North Korea ended on Thursday. But Seoul and Washington remained alert over the possibility that the North might follow up on some of its vaguely worded threats to attack the allies.

Such fears increased on Wednesday, when a hacking attack originating from an Internet address in China caused a widespread shutdown, paralyzing about 32,000 computers at South Korea’s two largest public broadcasters, an all-news cable channel and three banks.

The South’s Korea Communications Commission said on Thursday that a “single organization” was behind the spread of the malicious code. The virus infiltrated the networks through company servers that send automatic updates of security and other software.

While South Korean regulators said it was still too early to assign blame, suspicion fell on North Korea, which recently threatened the South and the United States with attacks. South Korea has previously accused North Korean hackers of using Chinese addresses to launch their attacks.

“With a strong suspicion over possible North Korean involvement, we are pursuing all possibilities,” a senior aide to President Park Geun-hye told reporters, speaking on condition of anonymity.

Kim Jong Un seems to be ratcheting up the tension on the Korean Peninsula for some reason. Whether it’s leading to something is, of course, unclear, but perhaps this assembly on April 1st will tell us something. 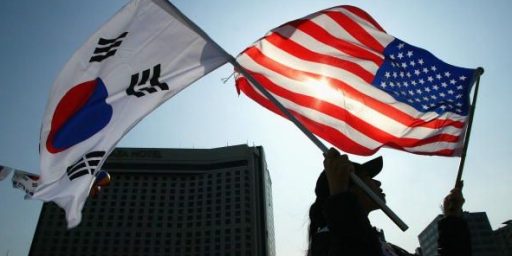