A North Korean diplomat has announced that North Korea is preparing to restart its nuclear reactor, partially dismantled last year as part of its negotiations over its nuclear program:

PANMUNJOM, Korea – North Korea said Friday it is making “thorough preparations” to restart its nuclear reactor, accusing the United States of failing to fulfill its obligations under an international disarmament-for-aid agreement.

It is the first time the communist nation has confirmed a reversal of steps taken since last year to disable its nuclear program because of Washington’s refusal to quickly remove it from a U.S. terrorism blacklist.

“We are making thorough preparations for restoration” of the Yongbyon nuclear complex, the deputy director-general of North Korea’s Ministry of Foreign Affairs, Hyun Hak Bong, told reporters. He did not say when Yongbyon might begin operating again.

The sticking point for the United States seems to be North Korea’s reluctance to accept a program to verify its actions.

Have a nice day. 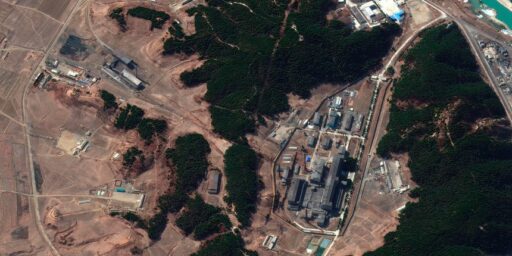