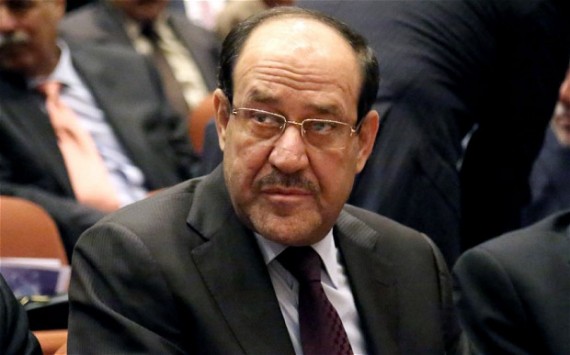 Notwithstanding pressure from forces inside his own country, as well as the United States and Iran, Iraqi Prime Minister Nouri al-Maliki apparently has no plans to step aside:

BAGHDAD — Despite sharp criticism from almost every political party in Iraq and pressure from friendly foreign powers to step down, Prime Minister Nuri Kamal al-Maliki announced Friday that he would run for a third term as prime minister.

He never suggested he would step down. But the chorus of criticism over his sectarian policies, which helped create the conditions that led to a large swath of the country falling to Islamic extremists, had left many believing that lacking supporters, he might relinquish power.

They appear to have underestimated his desire to hold on to it.

“I will not give up my candidacy for a third term,” Mr. Maliki announced in a statement read on Iraqiya, the state television channel.

He noted that the bloc of lawmakers that supported his nomination was the largest in the Parliament and that they should not be asked to meet any conditions imposed by other legislative groups, such as supporting another different candidate

Suggesting he was akin to a soldier who does not desert the battlefield, Mr. Maliki said he would “defend Iraq and its people” against “terrorists,” a reference to the Islamic State in Iraq and Syria, the Sunni extremists who have taken control of many cities in the north and west of the country including Mosul, the country’s second-largest urban area.

Mr. Maliki’s language, which had an almost messianic tone, suggested he would prove difficult to dislodge and that the negotiations over forming a new government could drag on for weeks, if not months.

His statement defied not just other lawmakers but also Iraq’s senior Shiite cleric, Grand Ayatollah Ali al-Sistani, who on Friday said the Parliament’s inability to form a government at its first meeting on Tuesday was a “disappointing failure.”

Speaking through his representative, Ahmed al-Safi, Ayatollah Sistani said that Iraq’s politicians must form a government “rapidly” and adhere to the constitutional schedule which calls for a complete government to be in place by mid-August. Most important, the ayatollah’s representative said, the government must reflect “national consensus.”

Ever since the crisis in Iraq began several weeks ago, there seems to have been a consensus that has developed not only among people like Ayatollah Sistani inside Iraq, but also among countries that are typically adversaries like Iran and the United States that Maliki is responsible for much what has gone wrong in the country. The United States in particular has called upon Maliki to, at the very least, create a more inclusive governments that includes elements of the Sunni and Kurdish populations of the country that he had purged in the years since American troops left Iraq. Implicit in those calls, though, has been the idea that perhaps the best solution would be a new Prime Minister. Maliki, quite obviously, is having none of that. At the very least, this latest announcement on his part would seem to indicate that the political instability in Iraq, and that can only help ISIS and the other groups seeking to destabilize the country even further.