The NRA is calling President Obama an "elitist hypocrite" for opposing armed guards in schools while sending his own girls to school with armed guards. 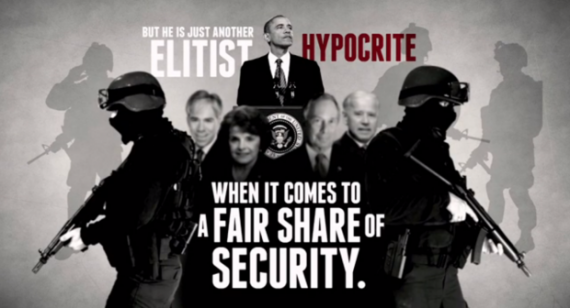 The NRA is calling President Obama an “elitist hypocrite” for opposing armed guards in schools while sending his own girls to school with armed guards.

The National Rifle Association released a new television commercial Tuesday night charging President Barack Obama of hypocrisy for being “skeptical” about placing armed guards at schools, while his own two daughters are protected by the U.S. Secret Service.

“Are the president’s kids more important than yours?” a narrator says in the 30 second ad. “Then why is he skeptical about putting armed security in our schools, when his kids are protected by armed guards at their school.”

The commercial is running on the Sportsman Channel, a cable network focused on outdoors programming such as hunting and fishing. It is also posted on a dedicated web site “Stand and Fight.”

On Wednesday, Obama is set to unveil a new set of proposals that would place very tough restrictions on the ownership and sale of firearms.

In the ad, the narrator only mentions Obama by name, but it also features images of Vice President Joe Biden, Sen. Dianne Feinstein, New York City Mayor Michael Bloomberg and NBC anchor David Gregory. Bloomberg is an influential voice in favor of stricter gun laws and has dipped into his personal fortune to help fund a lobby campaign, and Feinstein, a California Democrat, is helping spearhead a congressional effort to enforce tougher gun laws.

Gregory questioned NRA CEO Wayne LaPierre in a December interview about the effectiveness of the organization’s proposal to put armed guards in schools. After the interview, the NRA and conservative media outlets noted that Gregory’s children attended the same school as Obama’s daughters and the school has a security department.

“Mr. Obama demands the wealthy pay their fair share of taxes,” the narrator says. “But he is just another elitist hypocrite when it comes to a fair share of security. Protection for their kids and gun-free zones for ours.”

The “Morning Joe” gang was apoplectic about the ad, with both Joe Scarborough and Mika Brzezinski calling it disgusting and out of bounds. They’re wrong.

Now, I think the ad’s argument is silly. The president and his family have unique security requirements. It’s hardly hypocritical for Obama to send his girls to school protected by the finest protective detail in the world while opposing having poorly trained armed guards at the thousands of other schools out there. Generally speaking, not only is the security threat at schools quite low but the dangers of having loaded weapons there enhance rather than lower the risk of violence.

But the ad’s neither tasteless nor over the line. The Obama girls’ faces aren’t shown and there’s certainly no suggestion that they shouldn’t be protected; indeed, the ad advocates that all kids deserve the same kind of protection.

Beyond that, there’s a kernel of truth in the “elitist hypocrite” argument, even if it’s poorly articulated here. The fact of the matter is that a lot of liberal politicians and celebrities who are vocal on the need for gun control and who poo-poo the notion that Americans need to be armed to protect themselves and their families who nonetheless avail themselves of armed bodyguards. As with the president, there may be a legitimate case for a distinction—a US Senator or an actress is simply more likely to be a target than most of us—but the optics are indeed strange.