Congress passed the extension of the PATRIOT Act in the late hours of Thursday, but President Obama is in France for the G-8 Summit. So, you may wonder exactly how the President managed to sign the bill into law before the midnight Eastern Time deadline. Well, it was slightly unconventional but apparently entirely legal:

According to aides, Obama had to be awakened early Friday, which was after the deadline by French beach resort time.

The commander-in-chief reportedly reviewed the provisions carefully and ordered his signature affixed to said bill.

Wait! What? The president of the United States didn’t actually sign it himself??

According to the White House, upon President Obama’s direct specific orders from France, a machine put his name on the legislation back in the White House, where midnight had yet to arrive. The official White House notice of the signing arrived with just six minutes to spare.

This struck me as unconventional to say the least, and possibly not within the spirit, if not the letter, of the Constitution’s requirement that the President actually “sign” a bill for it become law. Nonetheless, the White House is confident that the action is entirely legal:

Jay Wexler, a Boston University law professor and author of “The Odd Clauses: Understanding the Constitution Through Ten of Its Most Curious Provisions,” says the constitutionality of using an autopen was confirmed in a thorough 2005 Office of Legal Counsel opinion.

“We examine the legal understanding of the word ‘sign’ at the time the Constitution was drafted and ratified and during the early years of the Republic.  We find that, pursuant to this understanding, a person may sign a document by directing that his signature be affixed to it by another. … Reading the constitutional text in light of this established legal understanding, we conclude that the President need not personally perform the physical act of affixing his signature to a bill to sign it within the meaning of Article I, Section 7 [of the Constitution.]”

Look at the relevant section of Article I, Section 7:

Every Bill which shall have passed the House of Representatives and the Senate, shall, before it become a Law, be presented to the President of the United States; If he approve he shall sign it, but if not he shall return it, with his Objections to that House in which it shall have originated,

Was the bill “presented” to the President? Well, according to the media reports he reviewed it so most likely a copy was transmitted to him in Europe.

Did he “sign” it? Is signing via electronic device from thousands of miles away what the Founders had in mind? Probably not, but they probably also didn’t have ball point pens in mind either. It isn’t the means of signing that’s the issue but the manner and, in this case, the cause for concern should be that at a document is “signed” by the President without him actually being in the room, or the country. It may be Constitutional, but I hope they turn the machine off at night so someone isn’t granting pardons under the rug. 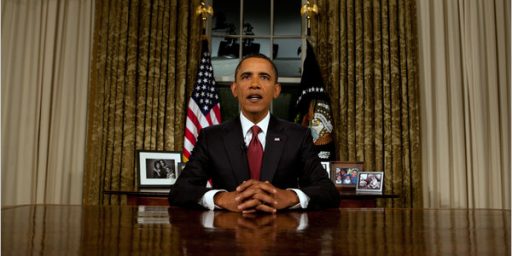