Obama Speaks Out About Trump’s Decision To End DACA 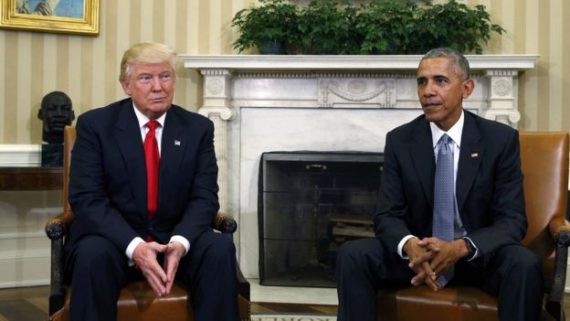 Former President Obama has been largely silent regarding political matters since leaving office just over seven months ago, however, he broke that silence today in response to the decision by President Trump to end the program he enacted five years ago to protect people who were brought to the United States illegally when they were children:

“Immigration can be a controversial topic. We all want safe, secure borders and a dynamic economy, and people of goodwill can have legitimate disagreements about how to fix our immigration system so that everybody plays by the rules,” Obama wrote. “But that’s not what the action that the White House took today is about.”

Obama signed the executive order creating the program in June 2012 and sees it as a major achievement. He promised after the election that any move to get rid of it would prompt him to speak out against his successor.

And with the Trump administration laying the blame for its move on Obama — his executive order was unconstitutional, the White House argued, and Attorney General Jeff Sessions Tuesday morning cited “the previous administration’s disrespect for the legislative process” — the former president argued in his statement that he had waited for a bill to sign, but Congress never sent him one.

He said he refused to leave people brought illegally to the country as children in limbo.

“Ultimately, this is about basic decency. This is about whether we are a people who kick hopeful young strivers out of America, or whether we treat them the way we’d want our own kids to be treated. It’s about who we are as a people – and who we want to be,” Obama said, calling Trump’s move “wrong” and “self-defeating.”

The statement made several references to “the White House,” but did not mention Trump, either by name, or as the president specifically. But Obama portrayed the decision as one of pique and politics, not as a response to the prospective challenge in court that several Republican state attorneys general had threatened to bring. White House press secretary Sarah Sanders said Tuesday that that lawsuit could have resulted in the program being ended abruptly.

You can read the full statement here, but here are some of the more important parts:

Immigration can be a controversial topic. We all want safe, secure borders and a dynamic economy, and people of goodwill can have legitimate disagreements about how to fix our immigration system so that everybody plays by the rules.

But that’s not what the action that the White House took today is about. This is about young people who grew up in America – kids who study in our schools, young adults who are starting careers, patriots who pledge allegiance to our flag. These Dreamers are Americans in their hearts, in their minds, in every single way but one: on paper. They were brought to this country by their parents, sometimes even as infants. They may not know a country besides ours. They may not even know a language besides English. They often have no idea they’re undocumented until they apply for a job, or college, or a driver’s license.

Over the years, politicians of both parties have worked together to write legislation that would have told these young people – our young people – that if your parents brought you here as a child, if you’ve been here a certain number of years, and if you’re willing to go to college or serve in our military, then you’ll get a chance to stay and earn your citizenship. And for years while I was President, I asked Congress to send me such a bill.

That bill never came. And because it made no sense to expel talented, driven, patriotic young people from the only country they know solely because of the actions of their parents, my administration acted to lift the shadow of deportation from these young people, so that they could continue to contribute to our communities and our country. We did so based on the well-established legal principle of prosecutorial discretion, deployed by Democratic and Republican presidents alike, because our immigration enforcement agencies have limited resources, and it makes sense to focus those resources on those who come illegally to this country to do us harm. Deportations of criminals went up. Some 800,000 young people stepped forward, met rigorous requirements, and went through background checks. And America grew stronger as a result.

But today, that shadow has been cast over some of our best and brightest young people once again. To target these young people is wrong – because they have done nothing wrong. It is self-defeating – because they want to start new businesses, staff our labs, serve in our military, and otherwise contribute to the country we love. And it is cruel. What if our kid’s science teacher, or our friendly neighbor turns out to be a Dreamer? Where are we supposed to send her? To a country she doesn’t know or remember, with a language she may not even speak?

It is precisely because this action is contrary to our spirit, and to common sense, that business leaders, faith leaders, economists, and Americans of all political stripes called on the administration not to do what it did today. And now that the White House has shifted its responsibility for these young people to Congress, it’s up to Members of Congress to protect these young people and our future. I’m heartened by those who’ve suggested that they should. And I join my voice with the majority of Americans who hope they step up and do it with a sense of moral urgency that matches the urgency these young people feel.

Ultimately, this is about basic decency. This is about whether we are a people who kick hopeful young strivers out of America, or whether we treat them the way we’d want our own kids to be treated. It’s about who we are as a people – and who we want to be.

What makes us American is not a question of what we look like, or where our names come from, or the way we pray. What makes us American is our fidelity to a set of ideals – that all of us are created equal; that all of us deserve the chance to make of our lives what we will; that all of us share an obligation to stand up, speak out, and secure our most cherished values for the next generation. That’s how America has traveled this far. That’s how, if we keep at it, we will ultimately reach that more perfect union.

No doubt, there will be some criticism of the former President for speaking out publicly on political matters so soon after leaving office, thus to some extent breaking a precedent that has been largely followed since President George H.W. Bush was succeeded by President Clinton. While this has been a custom with regard to previous Administrations, though, it has by no measure become a rule of any kind, and Obama did make clear in one of his final press conferences that he did intend to follow this precedent but that there could possibly be exceptions if his successor chose to act in a manner that he felt required him to say something. When he said that, the former President specifically pointed to the DACA program and the possibility that President Trump could bring an end to a program that he felt was justified both legally, as a matter of policy, and morally. With today’s announcement, then, Trump basically guaranteed that his predecessor would seek to speak out against his decision.

As I’ve said in my previous posts on the President’s decision to end the DACA program, here and here, I essentially agree with what the former President said in his statement. Legally, the argument that DACA is either illegal or unconstitutional is by no means settled law regardless of what the White House may say. There is a strong and credible argument that the immigration laws that Congress has passed, combined with the prosecutorial discretion that the law has recognized as a prerogative of the Executive since before the founding of the United States, is more than sufficient to provide a legal basis for the former President’s actions. In any case, the appropriate venue for determining that question is a court of law, not the political branches and most certainly not a President who is clearly more concerned with pandering to his xenophobic, anti-immigrant base than he is with doing what is right or legal. Additionally, DACA was good policy both from an economic and moral point of view. Economically, it simply isn’t true that immigrants in general, or the DACA beneficiaries in particular, cost American jobs or that they hurt the economy. In fact, the evidence is strongly in favor of the argument that this group is a far greater benefit to the economy in general and job creation in particular than they are a hindrance of any kind. Morally speaking, there simply isn’t a valid argument in favor of what the Trump Administration has done today. With the exception of people who have committed violent crimes or who have long criminal records, sending people who have been part of the United States for as long as they can remember. As I said in my post earlier today, they have gone to American schools, adopted Amerian customs, assimilated into American society, and contributed to our economy in significant ways. Most recently, many of them were among the brave volunteers who helped save people in the wake of a devastating hurricane, in some cases even dying in the process of saving others.  Deporting them to a nation they have no real connection to would be cruel, inhumane, and un-American. Unfortunately, it would also be entirely consistent with what this country is turning into thanks to the man who won the election in November.

Going forward, it will be interesting to see just how involved in opposing the Administration’s decision the former President will become. The outrage oer the decision announced today has been swift, severe, and bipartisan. No doubt, this statement from the former President will only enhance that opposition and increase the pressure to do something to roll back what the Trump Administration has done. Arguably, the six-month delay in implementing this program has essentially put the ball in Congress’s support and, at least initially, there seems to be some indication that members of the House and Senat on both sides of the aisle are at least placing lip service to the idea of trying to revive the program. Whether that actually happens is, of course, another question and would likely require Republican leadership in both houses of Congress to accept the reality that they will need to work together with Democrats to do the right thing here even if it endangers their leadership position. Whether they’ll have the courage to do what’s right is a question I’ll leave for the future, but I’m going to guess that they won’t do anything of the sort.