The Federal Government is signing on to an effort by Texas and several other states to have the DACA program declared unlawful. 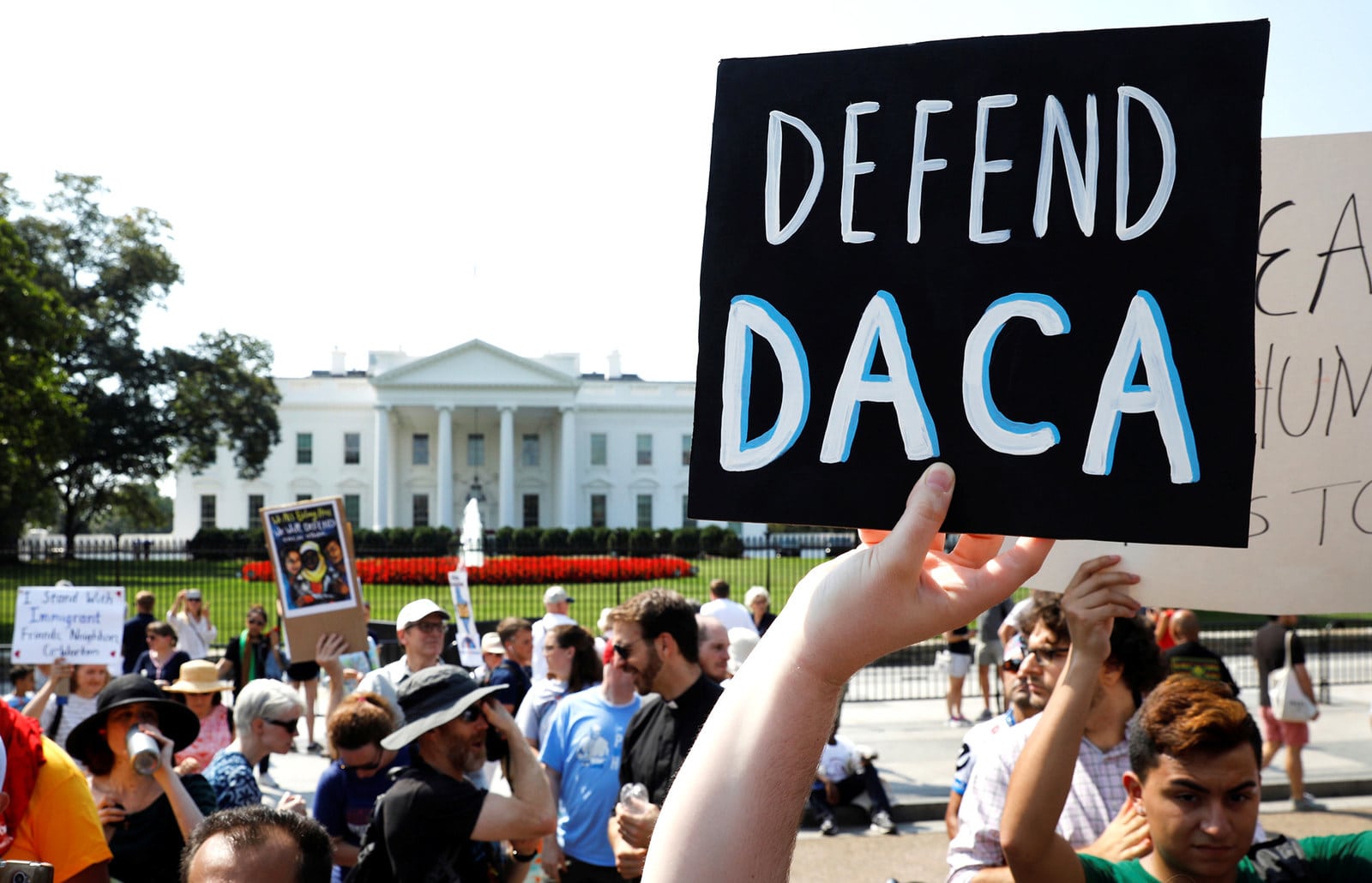 Mirroring to some extent the position it is taking in the Obamacare case currently pending in a Federal Court in northern Texas, the Trump Administration is siding with Texas and a group of other states seeking to strike down the Deferred Action for Childhood Arrivals (DACA) program:

The Justice Department late Friday night responded to Texas’ request for an injunction in its challenge of the Deferred Action for Childhood Arrivals program, agreeing with the state and several others that the program is “unlawful.”

Texas and six other states are suing the federal government to dismantle the immigration policy, which was put in place by the Obama administration in 2012. It enables individuals who were brought to the United States illegally as children to remain in the country without fear of deportation and grants them work permits.

While the Justice Department on Friday called the program “an open-ended circumvention of immigration laws,” it requested a delay if an injuction is issued. If ordered, the government argues, such an injunction would conflict with separate nationwide injunctions that have already been issued by courts in California and New York, and subject the agency to “inconsistent obligations.”

Attorney General Jeff Sessions, whose tenure as the nation’s top law enforcement official has been broadly defined by his pursuit of immigration restrictions, remains deeply opposed to DACA.

As Buzzfeed’s Chris Geidner explains, this all appears to be part of a Justice Department strategy to get the issues of the Constitutionality of DACA and of President Trump’s September 2017 Executive Order ending the program, which was supposed to have taken effect back in March, before the Supreme Court as soon as possible:

Justice Department lawyers laid out a path on Friday night that could force the legal dispute over the future of the Deferred Action for Childhood Arrivals program forward more quickly — and possibly to the Supreme Court as soon as this summer.

While lawsuits over the Trump administration’s efforts to end DACA have led to multiple nationwide injunctions keeping DACA partially in effect, Texas and a handful of other states filed their own lawsuit seeking to do the reverse: have DACA declared unlawful.

While agreeing with those states’ argument against DACA, the Justice Department lawyers wrote in a brief filed Friday night that granting an injunction in the Texas-led case would create “inconsistent obligations” for the federal government — and would lead the Justice Department to “seek stays of all the DACA injunctions in the respective courts of appeals and the Supreme Court.”

“The United States agrees with the State of Texas and other Plaintiffs that the policy known as Deferred Action for Childhood Arrivals (DACA) is unlawful,” the first sentence of the brief read.

The Justice Department brief goes on to explain the administration’s decision to “orderly wind down” DACA and spends a short two pages of the brief detailing how exactly DACA is unlawful, in the department’s view.

The brief goes on to detail the challenges to the decision to end DACA — challenges that led to injunctions by federal courts in California and New York that halted the “wind-down,” in part. Specifically, they barred the Trump administration from stopping DACA renewals.

Those injunctions, DOJ argued Friday night, “would conflict with a preliminary injunction — and especially a nationwide one — in this [Texas-led] case, subjecting the United States to inconsistent obligations.”

Simply put: DOJ would have the orders from federal courts that it continue DACA — and an order from a different federal court that it halt DACA.

Although the Justice Department does argue “that courts have typically held” in “similar situations” that “the appropriate course is for a district court to refrain from issuing a conflicting injunction,” DOJ nonetheless goes on to offer its view on what Hanen should do “if this Court decides that preliminary injunctive relief is appropriate.”

This issue — the “inconsistent obligations” concern — leads to what could quickly become the main effect of the Texas-based lawsuit: pushing all of the cases, and final resolution of the issue, more quickly to the Supreme Court.

This latest development comes at the same time that three other Federal District Court Judges have issued injunctions blocking the Administration from ending the DACA program, requiring it to keep in place the protections provided to existing DACA beneficiaries, and to accept new applications from people eligible for such protection. A fourth Judge meanwhile has ruled that a lawsuit against the Administration’s efforts to end the program can go forward can go forward, although he did not issue an injunction. In January, for example, a District Court Judge in San Francisco ruled that the Administration’s efforts to repeal the program violated the law and issued an injunction barring the repeal order from going into effect. That ruling was followed roughly a month later by a ruling from a second Federal Judge in Maryland who issued a similar ruling on much the same grounds as his colleague in San Francisco. In March, a Federal Judge in New York City denied a motion seeking to dismiss a similar lawsuit against the Trump Administration’s order in a ruling that cited many of the same grounds as the previous two cases and which also cited in support of its conclusions rhetoric from the President both in his speeches and in his Tweets. Finally, in April a Federal District Court Judge in Washington, D.C. issued an injunction similar to those issued by his fellow Judges in California and New York, but also ordered that the Administration must accept new applications from people eligible under the DACA rules that President Obama established when the program was first established six years ago. While these injunctions have been pending the Supreme Court declined to disturb the injunction in the San Francisco case, meaning that the government will be forced to go through the Ninth Circuit to appeal that case.

In this case, of course, Texas and its sister states, and now the Federal Government are making a completely different argument. They are arguing that the DACA program itself violates the law. As I noted in my post at the time the Texas lawsuit was filed, the argument raised by the Texas Complaint, which the Trump Administration largely adopts in its brief, attacks the DACA program on two grounds. The first argument should be a familiar one at this point since it has been raised in connection with challenges to executive action taken by both President Obama and President Trump, namely that the action itself failed to comply with the Administrative Procedure Act, a Federal law that governs how new regulations adopted by agencies of the Executive Branch must be adopted. The lawsuit also alleges that DACA violates existing immigration laws, that it exceeded the discretionary enforcement authority that existing law grants to the Executive Branch, that it violates principles of separation of powers between the Legislative and Executive Branches by improperly taking action that only Congress can take in connection with immigration law and that the states have been injured by these actions due to the costs they have been forced to incur as a result of the DACA program and other factors.

In any case, all of this significantly raises the stakes with respect to the DACA issue since it lays open the possibility, if not the probability, that we could end up with one Federal Court determining that the DACA program is not in compliance with the law while other courts are saying that the Trump Administration’s efforts to repeal that program are not in compliance with the law. The conflict here is obvious, of course, and that is apparently one of the main reasons why the Federal Government is getting involved in this litigation. As noted above, this appears to be a means to get the DACA issue to the Supreme Court as soon as possible, perhaps in time to be argued early in the next term if the Court agrees to accept the case for review, and to undercut the injunctions that have been issued against the Trump Administration’s efforts to repeal the law. After all, if the Court finds that the DACA program itself violates Federal law and the Constitution, then the injunctions barring its repeal would essentially become a dead letter. Whether or not this strategy works remains to be seen.

Here’s the Dept. of Justice brief: