Homeless men settling in for the evening at a subway stop near the White House in 2007. Washington's army of homeless are being cleared from the center of the US capital ahead of the historic inauguration of Barack Obama. (AFP/File/Paul J. Richards)

A rather odd story by AFP about the sweeping away of DC’s homeless for Barack Obama’s inauguration — based entirely on statements from street vagrants.

Before sunrise on Thursday, Frank Mearns will leave the place he calls home, a stone’s throw from the White House, and join thousands of others in Washington who are upping sticks and moving out for the presidential inauguration.  But Mearns isn’t about to make a quick buck by renting out his pied-a-terre. Nor is he heading out of town on an inauguration escape holiday. He’s one of Washington’s army of homeless who are being cleared from the center of the US capital ahead of the historic inauguration of Barack Obama.

It’s 24 degrees out there as I type, a mere three blocks from Mearns’ erstwhile home-away-from-home.

According to Michael O’Neill of the National Coalition for the Homeless, up to 1,200 people live rough in the security zone, including on Pennsylvania Avenue, the grand boulevard which the inaugural parade will march down.

“Up to” is an interesting bit of weasel-wording.   Certainly, there seems to be a panhandler every couple of blocks in this part of town.  There’s one guy who screams “Change” every time I walk outside my building. (Perhaps this will stop once Obama is inaugurated, since Change is among his major campaign promises.)  But an “army” of them?  Or, at least, an oversized battalion?  That strikes me as implausible.

This, however, is rather amusing:

The effort to clear the streets of Washington of its homeless population was unlike anything that former homeless man David Pirtle has witnessed. “I was on the streets when George W. Bush had his second inauguration in 2005 and it was nothing like this. There were no large-scale sweeps. I slept on Pennsylvania Avenue the night before and the night after the inauguration,” said the 34-year-old who now works for the National Coalition for the Homeless.

For whatever reason, the security and related measures for this inauguration are exponentially more drastic than they were four years ago. They’re closing off more roads and bridges and otherwise making the northwestern quadrant a royal pain well in advance of the event. Despite the tongue-in-cheek headline, BTW, I don’t think Obama’s personally responsible for any of it.   But, rather clearly, there’s a radically different mindset on the part of the security bureaucracy and Official Washington about how to proceed this time. 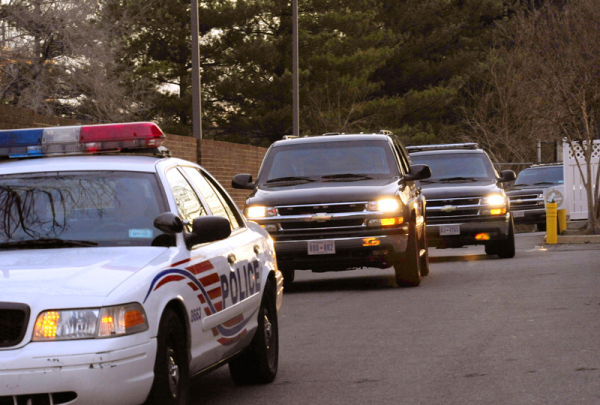