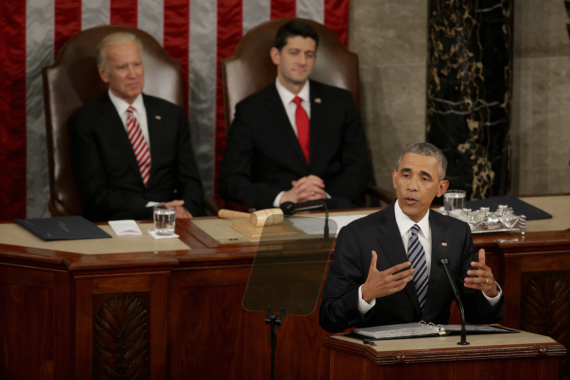 President Obama’s final State Of The Union address was the lowest rated in quite some time:

The decline in ratings from previous President hasn’t followed a straight line, of course. Typically, it has been the case that ratings for State of the Union addresses early in a Presidents tenure draw much higher ratings than those of ones later on, and this is especially true of the final years of a two-term President. President Clinton, for example, drew some 67 million viewers for his first State Of The Union address in 1993, while President George W. Bush drew more than 60 million viewers for each of the State Of The Union addresses he delivered in the two years after the September 11th attacks, while President Obama drew nearly that many f0r his first State of the Union address. Obviously, there is more interest in these speeches early in a President’s tenure than there is later on, especially at the end of a two-term Presidency when the final addresses are as much about taking victory laps as they are about a real policy agenda. Additionally, it’s worth noting that the ratings for Tuesday night do not take into account people who may have watching via online streaming on their computers or mobile devices. Based on past patterns, you can probably add another 1-2 million to account for those people.

Most likely, the next State of the Union will draw much higher ratings as the nation tunes in to see what the new President has to say. Of course, if Donald Trump wins the election the entire event will be emceed by Regis Philbin and will feature showgirls, the Radio City Rockettes, and musical performances by Katy Perry and Taylor Swift. I’ll be yuuuuuuge.