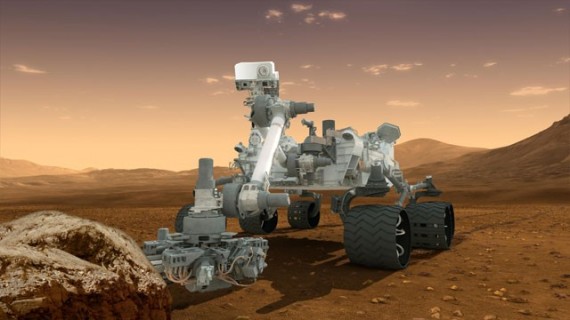 New findings from the Curiosity rover seem to indicate little evidence of life on Mars:

In findings that are as scientifically significant as they are crushing to the popular imagination, NASA reported Thursday that its Mars rover, Curiosity, has deflated hopes that life could be thriving on Mars today.

The conclusion, published in the journal Science, comes from the fact that Curiosity has been looking for methane, a gas that is considered a possible calling card of microbes, and has so far found none of it. While the absence of methane does not rule out the possibility of present-day life on Mars — there are plenty of microbes, on Earth at least, that do not produce methane — it does return the idea to the realm of pure speculation without any hopeful data to back it up.

The history of human fascination with the possibility of life on Mars is rich, encompassing myriad works of science fiction, Percival Lowell’s quixotic efforts to map what turned out to be imaginary canals, Orson Welles’s panic-inducing 1938 “War of the Worlds” radio play, and of course Bugs Bunny’s nemesis, Marvin the Martian.

But Marvin apparently did not emit enough methane for Curiosity’s sensitive instruments to find him.

“You don’t have direct evidence that there is microbial process going on,” said Sushil K. Atreya, a professor of atmospheric and space science at the University of Michigan and a member of the science team.

But NASA scientists are going strictly by their data, and they are leery about drawing broader implications to the question once posed by David Bowie, “Is there life on Mars?” John P. Grotzinger, the project scientist for the Curiosity mission, would go only so far as to say that the lack of this gas “does diminish” the possibility of methane-exhaling creatures going about their business on Mars.

“It would have been great if we got methane,” Dr. Atreya said. “It just isn’t there.”

Curiosity, which has been trundling across the planet for a little over a year, made measurements from Martian spring to late summer, coming up empty for methane.

Scientists have long thought that Mars, warm and wet in its early years, could have been hospitable for life, and the new findings do not mean that it was not. But that was about three and a half billion years ago. Methane molecules break apart over a few centuries — victims of the Sun’s ultraviolet light and of chemical reactions in the atmosphere — so any methane in the air from primordial times would have disappeared long ago.

That is why reports of huge plumes of methane rising over Mars in 2003 fueled fresh hopes for Martian microbes. Those findings, based on data from telescopes on Earth and a spacecraft orbiting Mars, set off a surge of speculation and scientific interest.

On Earth, most of the methane comes from micro-organisms known as methanogens, but the gas is also produced without living organisms, in hydrothermal vents. Either possibility would be a surprising result for Mars.

After the 2003 methane readings, “a lot people got excited and started working on it,” said Christopher R. Webster of NASA’s Jet Propulsion Laboratory in Pasadena, Calif., and the lead author of the paper in Science. “It was a very important result, because of the magnitude of methane.” The fresh data from Curiosity brings the earlier claims into question.

Not everyone is daunted. Robert Zubrin, president of the Mars Society, a nonprofit group dedicated to the planet’s exploration and settlement, said he was still convinced that Martian life was waiting to be discovered in underground aquifers.

“If it had found methane, that would have been killer,” Dr. Zubrin said, referring to Curiosity. “Yes, it’s disappointing in that we didn’t get a pony for Christmas. But it doesn’t mean there aren’t ponies out there.”

One of the scientists who found the methane plumes in 2003, Michael J. Mumma, of NASA’s Goddard Space Flight Center in Greenbelt, Md., said in an interview this week he was certain that his earlier measurements were still valid. He said he now believed that methane on Mars was episodic — released in large plumes and then quickly destroyed. He suggested, half-jokingly, that there could be huge colonies of methane-eating microbes on Mars that eliminated the gas from the air.

Dr. Mumma acknowledged that he could not identify any phenomena that would explain why methane plumes spurted out that year but not more recently, or how methane could be destroyed much more quickly on Mars than on Earth.

“Mars may not be operating the same way,” he said. “It’s a puzzle.”

One can hope, but for the moment Mars appears to be a barren world. The question now is whether that was always the case.