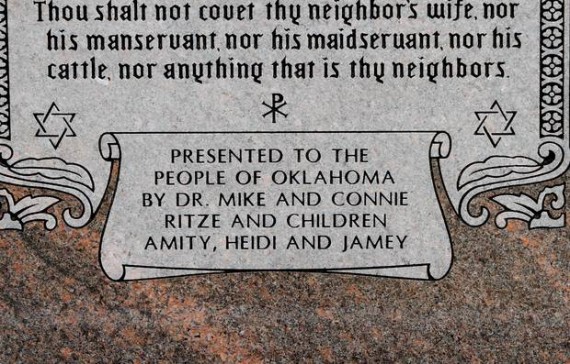 Well, this must be embarrassing:

An Oklahoma state lawmaker oversaw the installation of a 2,000-lb. granite block depicting the Ten Commandments on the grounds of the state capitol Friday, amid fears that the monument will spark a costly legal battle over its constitutionality.

But before state Rep. Mike Ritze (R), who sponsored the initial bill and whose family donated $10,000 to fund the project, worries about fielding a suit from the state’s American Civil Liberties Union, he first needs to deal with spelling errors, The Oklahoman reports.

The rose-stone block reads “Sabbeth” instead of “Sabbath.”

And at its base, the tenth commandment reads, “Thou shalt not covet thy neighbor’s wife, nor his manservant, nor his maidseruent.” It should read “maidservant.”

It kind of reminds me of this: