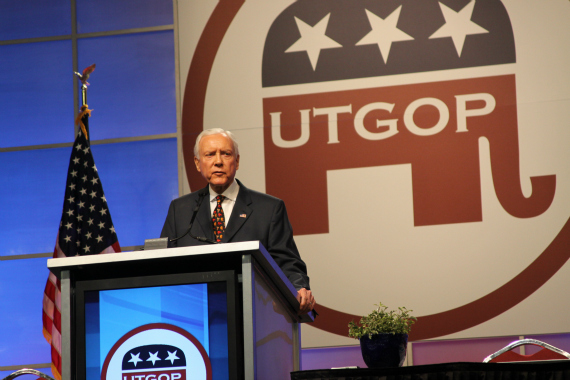 The Tea Party movement showed some of its power two years ago in Utah when it unseated Senator Robert Bennett and the people who led that movement made it clear in 2010 that they were gunning for Orrin Hatch and Richard Lugar, who have served in the Senate since 1977, as well. Unlike Lugar, Hatch responded to this threat by working his contacts throughout Utah for the better part of two years and co-opting a large part of the argument that the Tea Party leaders were making against him. He nearly avoided having to run in a primary at all at April’s GOP convention but fell short of the required majority by just 50 votes. On Tuesday, then, Hatch faces a primary race against Dan Liljenquist but it doesn’t look like he’s going to have much of a problem:

Sixty percent of the registered voters in Utah polled who said they will vote in the Republican primary backed Hatch’s bid for a seventh term in the U.S. Senate. Just under one-third of the respondents, 32 percent, said they supported Liljenquist.

The poll, conducted June 15-21 by Dan Jones & Associates, has a margin of error of plus or minus 3.6 percent.

“Those are very good numbers for the senator,” Hatch’s campaign manager, Dave Hansen, said. “It’s nice that the voters of Utah, the Republican voters, have that much confidence and support for him.”

Liljenquist, who forced Hatch into his first primary in 36 years at April’s state GOP convention, said he’s not surprised by the poll results.

“Our biggest challenge by far is name recognition,” Liljenquist said. “We’re going after a guy who has perfect name recognition in this state and has reinforced it with $10 million of spending and big endorsements,” including the presumptive GOP presidential nominee, Mitt Romney.

Pollster Dan Jones said Liljenquist has not been able to build on his convention success. There, Liljenquist won the votes of more than 40 percent of the GOP delegates while Hatch fell just short of the 60 percent he needed to become the nominee.

“I just didn’t see any movement for Liljenquist,” Jones said. “I kept waiting for the idea of not holding more than one debate to cut into some of the lead, but it didn’t. I think Hatch really convinced people of his knowledge of the issues.”

Bennett might have been able to save himself in a primary as well, but by the end of the convention process in 2010 he was in third place and thus ineligible for a spot on the primary ballot. Hatch, quite obviously, learned a lesson from what happened to Bennett and looks to be headed to a big victory on Tuesday which, this being Utah, means that he’ll also be re-elected in November. Assuming that does occur, Hatch will be the senior member of the Republican caucus in the Senate and thus eligible to serve as President Pro Temporei, third in line for the Presidency, if the Republicans gain control of the Senate.

Orrin Hatch Wins By A Landslide