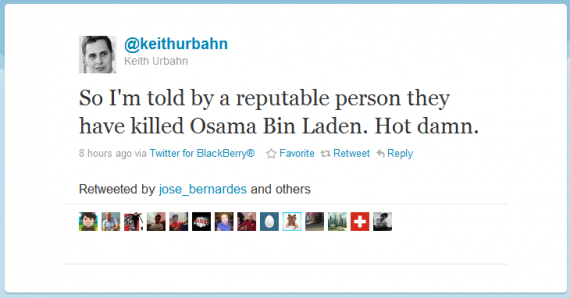 The first reports that Osama bin Laden had been killed were broken on Twitter, The Atlantic’s John Hudson reports.

The stunning news of Osama bin Laden’s death didn’t come from a major media company. It came from a tweet. When the White House announced Sunday night that the president would issue a 10:30 p.m. address to the country, speculation surged about whether U.S. officials had killed Libyan leader Muammar Qaddafi, Bin Laden or any number of other “national security” targets. But on Twitter, a message by Keith Urbahn, the chief of staff of former defense secretary Donald Rumsfeld, tilted the rumors in favor of bin Laden.

“So I’m told by a reputable person they have killed Osama Bin Laden,” he wrote. “Hot damn.”

CNET’s Greg Sandoval is calling it a major turning point for citizen journalism. “Tonight’s news was by far the weightiest story that Twitter has ever helped break,” he wrote. Interestingly, while Urbahn’s tweet carried great weight in the U.S., it wasn’t the first Twitter account to actually break the news.

That honor goes to an IT consultant who identifies himself as Sohaib Athar under the Twitter handle “ReallyVirtual.” About 12 hours ago, Athar began live-tweeting the attack from Abbottabad, the town where bin Laden was killed. “Helicopter hovering above Abbottabad at 1AM (is a rare event),” he tweeted. That would have been at about 3:30 p.m. ET on Sunday. He continued tweeting about the operation, having no idea about its significance.

Of course, the Urbahn tweet was a well-sourced rumor. And the Athar report actually missed the story, reporting the raid without any cognizance of its target. And, despite following a large number of well placed national security types on Twitter, I never saw either tweet before learning about it when I awoke this morning. (I had seen speculation as to what President Obama was going to talk about, including a correct guess. But I figured the news would keep.)

There’s no way that mainstream news outlets are going to be the first with most stories in an environment where millions of people are self-publishing. Someone is always going to have inside knowledge or be first on the scene–often with a camera phone and a Twitter account. And, if they have enough followers, their reports might even go viral before the networks or big papers can make it through even the current expedited editorial process. 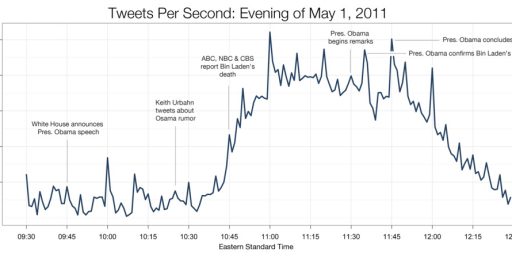