The Binder Face Edition OTB Caption ContestTM is now over.

The Binder Face Edition OTB Caption ContestTM is now over. 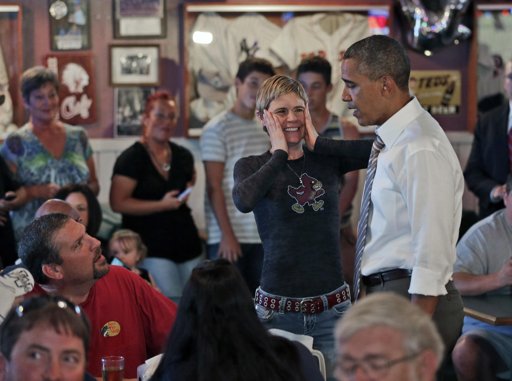 Second: Tillman – OMG!!! (repeat as necessary) (caused another woman to say, “I’ll have what she’s having…” – rodney)

Third: Hal 10000 – “What is she doing, Mr. President?” “Like most of my supporters, she’s trying to cover her ears when the subject of Benghazi comes up.”

Jc – “That is correct sir, the healthcare law means your wife cannot be declined coverage due to her Pre existing condition”

JKB – Having drunk the kool-aid, Kari felt her reason and accountability drain from her as she was assimilated.

Butch Bracknell – Mr President!! I like Angry Birds!! Here, look at my tee shirt! My favorite is the yellow turbo bird…

“…and that’s how I killed Bin Ladin.”

woman: I can usually read minds, but I’m drawing a blank.
Obama: Bingo.

The Monday Contest has already been ridden hard and put away wet.