The Shanghai Sights Edition OTB Caption ContestTM is now over.

The Shanghai Sights Edition OTB Caption ContestTM is now over. 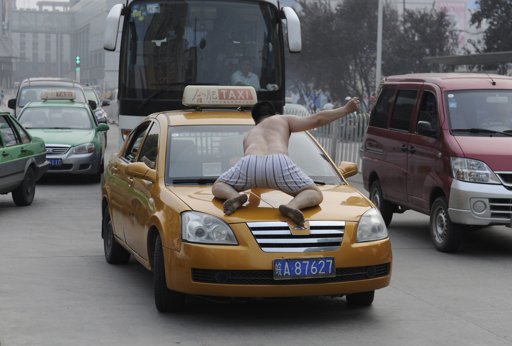 Second: Jc – I’m not gonna pay alot for this muffler!

Third: Peacewood – “On the whole. I prefer the old squeegee boys.”

Fog – In China, it’s cheaper to rent a local to sit on the hood of your car than it is to buy a GPS device.

Donald sensing – “You idiot! I wanted to go to Hong Kong, not New Delhi! I told you to take that left turn at Albuquerque!”

Mr. Prosser – Dave became quite irate when the cabbie wouldn’t let him ride until he washed his feet.

Tryout for the role or Major T. J. “King” Kong for the new low budget remake of Dr. Strangelove.

No, the show is Cash Cab, not Crash Cab

The Thursday Contest is already having a blast.