The Pole Dance Edition OTB Caption ContestTM is now over.

The Pole Dance Edition OTB Caption ContestTM is now over. 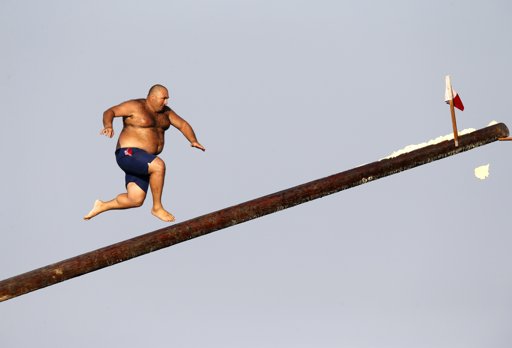 Second: OzarkHillbilly – “Hold my beer and watch this!”

He who must not be named – They took Greco-Roman wrestling out of the Olympics for this?.

David in KC – Chris Christie is pretty fly for a fat guy.

john425 – Regretfully, James Gandolfini did not make it to the end of the line.

markm – Still trying to recover from the ‘red line’ statement of a year ago President Obama issues a new global warning: “LET ME BE CLEAR….any regime anywhere that does something we don’t like…..this is a brown pole with a flag thingy on it for us. Anyone that climbs it….then this would change my calculus. That would change my equation”.

The pole dancing exhibition left a little to be desired.

The first American Ninja Warrior turned out to be a little different than expected.

So what are Chris Christie’s chances of winning the Presidency?

A politician is measured by how well he does in the poles.

The Monday Contest is already off to the races.