The HASSAN CHOP Edition OTB Caption ContestTM is now over.

The HASSAN CHOP Edition OTB Caption ContestTM is now over. 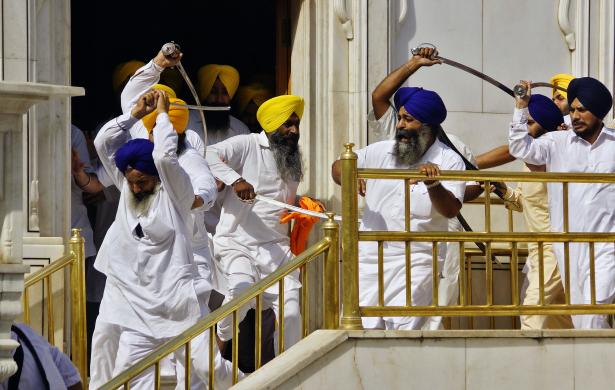 All very good… but I never liked the “Everyone wins” play, so here’s my take.

Second: Kevin – If I told you once, I’ve told you a thousand times. NO SOUP FOR YOU!

Doug Mataconis – The “Blue Turban” v. “Yellow Turban” argument got just a bit out of hand.

Tillman – All hell broke loose at the Mumbai IKEA.

RockThisTown – 7-11 & Dunkin Donuts employees debate whether to allow Joe Biden as a customer.

Pinky – This happens every time the St, Louis Rams redesign their uniforms.

CSK – Once again, the Yellow Hat Team prevailed in the Mumbai Hide and Sikh Invitational Classic.

He who must not be named – It slices, it dices, it never gets dull! The new Sikh-o-matic from Ronco!

John425 – Training course in terrorist beheadings gets off to a wrong start.

“To be excused, you need a note from your Doctor saying you’re Sikh.”

Things got out of hand at the Paul Hooson Look-a-like contest.

“The first thing we do, let’s kill all the lawyers.”

“My name is Inigo Montoya. You killed my father. Prepare to die.”