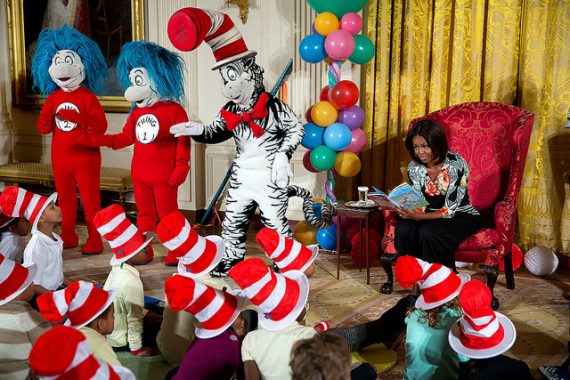 Second:Jeron – Once upon a time, Earth was blue, brown and green. Now it’s all blue.

Third(tie): Mark Ryan – The Cat in the Hat revealed his new Thing 3 today!!!

RockThisTown – The First Lady shows her compassion for the French people by . . . oh wait, never mind.

Robert W. Armijo – Meanwhile, back in the White House Situation Room, President Obama consults with his top foreign policy advisers — Thing 1 and Thing 2 — for possible solutions to the ISIS crisis.

jd – Email? The Cat in the Hat knows a LOT about that!

Franklin – The school nurse was in a rage that her precautions for head lice were being totally ignored.

CSK – These endless revivals of Cats-no matter how they may be updated for a young audience-are getting really, really tedious.

“…and then the Grinch said, “At this point, what difference does it make?”

“Oh Look, The northbound and southbound Zax’s look just like Barry and Putin.”