The Cobbler's Son Edition OTB Caption ContestTM is now over.

The Cobbler’s Son Edition OTB Caption ContestTM is now over. 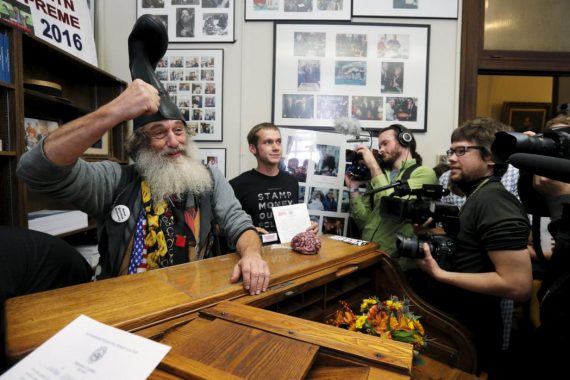 First: Franklin – The “I’m a lover not a fighter” candidate reminds us all to wear our rubbers.

Third: Jc – Robert Deniro in – “Vermin Supreme – 2016, Grassroots and black boots!” This film is not yet relevant.

Mu – “And CSPAN is not going to show any speaker deviating from the new dress code”.

Jeron – These boots are made for walking, Johnny.

Tony W – After the film went viral all over the internet, Santa finally agreed it was time to stop drinking.

al-Ameda – “I remain fully committed to repealing every single word of Obamacare.”

The Democrats finally find a Presidential candidate with a sole.

By Happenstance the lead Republican Presidential candidate is also a vermin.

“Whaddya Das Boot is really about a submarine?”