The Stan Nousman Edition OTB Caption ContestTM is now over.

The Stan Nousman Edition OTB Caption ContestTM is now over. 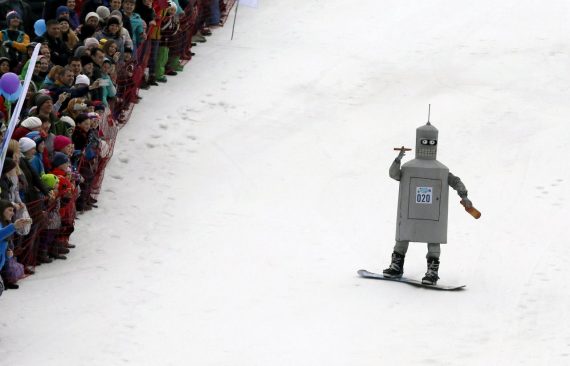 First: Hal_10000 – The appearance of fully functional robots in society has ignited a fierce debate among Republicans as to which bathrooms they will be allowed to use.

Third: al-Ameda – “Am I not in Kansas anymore?”

Guarneri – The most interesting man in the world, 3016

Mu – C3PO was not happy how the repair job after his latest mishap turned out.

Paul Hooson – It only gets worst….His ski instructor was Sonny Bono…

T – Yeah well, I’m gonna go write my own caption! With blackjack! and.. hookers! In fact, forget the caption!

My other ride is a Zamboni.

Once the audition tapes were released everyone understood why Robert Downey, Jr. and not Charlie Sheen got the role of Iron Man.

The Schwartz is strong with this one…..

This is not the ‘droid you’re schussing for…..

LAT: Bono for the World Bank