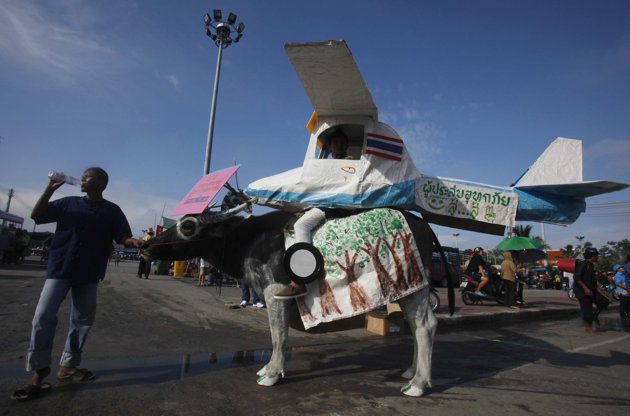 First: Mr. Prosser – The Taliban proudly show off their newly developed drone to the world.

Second: JKB – Turns out the “Drone virus” was more of a spell.

physics geek – Cashing in my frequent flier miles did not turn out quite like I thought it would.

NickNot – With two bottles of Cuervo, a couple of boxes, and some duct tape, you can make darn near anything.

Maggie Mama – Things are getting real hinky at Zucotti Park ever since the protesters lost control of their anti-Wall Street message..

Joh425 – White House hybrid vehicle: It flies around with a lot of bull.

With the loss of Jobs, Apples goes for a quick win in the market with its poorly conceived iPlane

…and then things took an Immelmann turn for the worse.

Can’t see the forest for the trees.

Can you spot the hidden Lockheed F-117 Nighthawk?

I had a little problem with the landinggearsteer.

“I’m supposed to meet a little dog and go quaff some Root Beer.”

The Monday Contest has been having a gruff day.