A homeowners association in Augusta, Georgia is coming under fire after denying Homes For Our Troops a permit to build a house for a paralyzed African-American veteran. 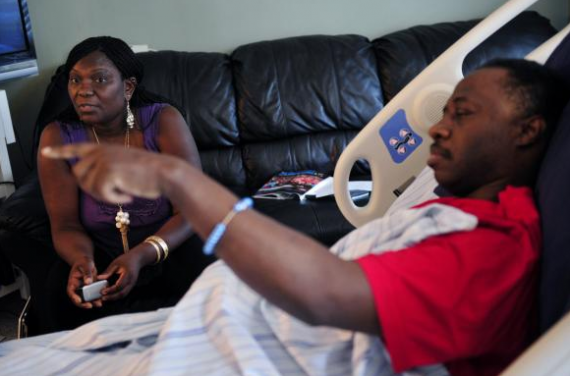 A homeowners association in Augusta, Georgia is coming under fire after denying Homes For Our Troops a permit to build a house for a paralyzed African-American veteran.

The Augusta Chronicle (“Group looks at other sites for paralyzed vet’s home“):

Homes for Our Troops formally announced at a press conference today they would not build a home for paralyzed veteran Sean Gittens at the Knob Hill subdivision in Evans.

Standing next to the Gittens family at the site where the home would have been built over the weekend, the group’s founder, John Gonsalves, said he was sad to be looking at an empty lot instead. Homes for Our Troops has built homes free of charge for over 100 severely disabled veterans nationwide. Gonsalves said it’s the first time a build has been blocked by a homeowners association. “We know that this is no way is a reflection on the community of Knob Hill and the people that live in here … We do this all over the country and we know that the American people are behind it,” Gonsalves said.

The association had blocked construction of the Gittens home after months of negotiations because it believed the house would lower neighboring property values. Homes for Our Troops said it would continue to work to get a design approved, but ultimately left the decision up to the Gittens family, which currently rents a home in the subdivision.

“I didn’t want to put any kind of pressure on the family to think that because we had already bought this lot, that this was the end game, that it had to be here,” Gonsalves said. “I couldn’t live with my own conscience if I did that … they need to feel fine with where it is that we are going to build this home.”

Sharon Gittens, Sean’s wife, told news media Monday the family decided not to stay in Knob Hill because they did not feel they would be welcome. At the press conference, she said was ready to put the situation behind her and thanked neighbors who had supported her family. She asked them to encourage the association to embrace the veterans and not worry so much about property values.

Not surprisingly, the HOA is coming under fire in the discussion board, getting called “Snob Hill” and accused of racism. VodkaPundit’s Stephen Green adds, “I don’t know what HOA is behind blocking construction, but I do know they ought to be ashamed.”

It’s hard not to be sympathetic with the plight of SFC Gittens, a 20-year Army veteran who sacrificed much in the service of his country. According to an earlier Chronicle story (“Gittens family says home won’t be in Knob Hill“) “He was deployed three times, first during Desert Storm, then after the September 11 attacks. The last time, he volunteered to go back to Iraq in 2007 and received concussive head injuries from an IED explosion. After he returned, he suffered a brain aneurysm and a stroke as a result of his injuries.” Indeed, it’s a shame that he’s got to rely on charity to get a home built; you’d think the taxpayers could pony up under the circumstances. It’s the least we can do.

The same report offers a mixed account of the HOA’s actions:

The association, which had been negotiating with the builder for several months, had wanted a larger house to better fit in with the neighborhood. It also wanted a detailed landscaping and irrigation plan. Homes for Our Troops, however, said the association at first approved the design and then reversed that decision.

Homes for Our Troops met the minimum square footage recommendation and agreed to alter the siding from vinyl to the required brick, she said. Gittens said it was not so much her neighbors as it was the board who made her feel unwelcome.

“I feel if I live in this neighborhood, I’m going to have to deal with them at some point, and I know that they don’t welcome us with open arms,” she said.

The association had attempted further design negotiations with Homes for Our Troops during the weekend. Trump said a board member told him the organization would not have been able to build anyway, because Columbia County had not approved an erosion control plan. The county, however, disputed that assertion. An erosion control plan isn’t needed unless a house is being built within 200 feet of state waters, said George Eastman, the manager of the county’s Development Services Division. The site did fail an erosion control inspection, but that is not uncommon and the needed corrections are minor, he said.

The written approval came from Knob Hill BOD President Rick Trump on June 2nd. Late last week, a lawyer for the POA served the contractors on site with a cease and desist letter to stop the preparation of the build site. Facing strong opposition from the Property Owners Association, the Knob Hill Board of Directors and the Property Owners Association met again on June 20th, just four days before the planned kickoff of the home build.

Homes for Our Troops has now been told that it must begin anew the entire approval process and that the house needs to be at least 3,400-square-feet and multi-level to even be considered.

“Despite our working closely with the Knob Hill Property Owners Association over the past four months, we find ourselves in an untenable situation,” said Homes for Our Troops Founder John Gonsalves. “We cannot afford to add 700-square-feet to the house, particularly under our special adaptive plans. And our experience in building over 100 homes dictates that severely injured veterans need a specially adapted single level home. Frankly, this late action begun by the Knob Hill Property Owners means we must suspend working on the home. The Knob Hill Property Owners Association has now assured that SFC Gittens and his family will not be able to have the home they so desperately need. We have done everything in our power to try to resolve this situation, but it appears that the community is not willing to accept this home, and SFC Gittens and his family into the community.”

HOAs exist to protect property owners and I’ve got no real heartburn if they’re simply holding Homes for Our Troops to the charter. A community of 4000 square foot brick homes with three car garages and substantial landscaping doesn’t want someone building a 2000 square foot house with vinyl siding, no garage, and no landscaping–even if it’s going to be occupied by a disabled veteran. There are plenty of other places to build houses like that.

In this case, it’s not quite that clear cut. Homes for Our Troops was building a 2700-square-foot home, which the HOA approved before demanding that it be expanded to 3400-square-feet. More importantly, they approved a single-level home and then demanded a two-level home–doable but much more expensive for someone in a wheelchair, since it would presumably require some sort of chairlift for the stairs and other unusual accommodations.

Since the HOA initially approved the design and then recanted, something doesn’t add up. Similarly, citing an erosion inspection as the cause of the holdup when the county says it’s routine and an easy fix is fishy.