This is the second part of the my response to Kevin’s Peak Oil posts. This looks at Part 2 of Kevin’s series.

In this part of his series Kevin looks at the work of M. King Hubbert and his Hubbert curve and why Hubbert has it, basically right. Hubbert’s idea, which later became known as the Hubbert curve, was first outlined in this paper.

I am not going to dispute Kevin’s statements on the problems/issues with extracting oil, but what I am going to take some exceptions to are his portrayal of Hubbert’s article and ideas. First it Hubbert’s successful forecast of oil production for the lower continental U.S. One of Hubbert’s forecasts (there were two) was that oil production would peak in 1970. That prediction was correct. However, Hubbert’s other forecast was obviously wrong, and another interesting bit of information in the article is Hubbert’s prediction for world wide oil production. That peak was to be in 2000. You don’t usually hear to many people talk about this. 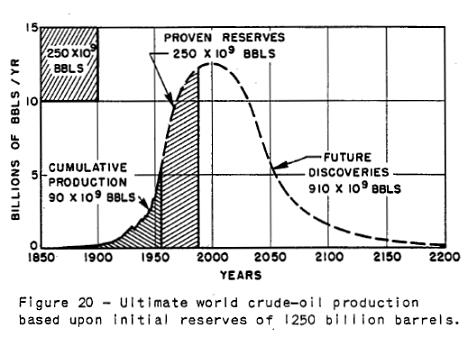 Now, the problem is noted by Hubbert himself. If the ultimate world production in greater than 1,250 billion barrels then the peak is moved back. So this does not disprove Hubbert in the sense that his model is wrong, but that he didn’t use the best guess/estimate when constructing it. But it does raise a number of possible problems with using the Hubbert curve as a predictive tool, IMO.

The first is that as the price for an exhaustable resource goes up, there will be more exploration to find new sources of the exhaustable resource. Granted this cannot go on indefinitely, but it does make using the Hubbert curve as a predictive tool problematic. Second, Hubbert himself noted this one, is that new recovery processes might improve the situation also pushing back the date of the peak. Third, there is the economics that is overlooked. Another thing that many Hubbert enthusiasts wont tell you about is that they often have to use more than one curve (i.e., more than one local maxima) to get a good fit to the data. You see, there was a problem around 1980 or so when production peaked and then declined for a number of years (you can see it here). So how many peaks will we actually go through before we get to the last one? Hubbert is silent on that point since he and all of those who have followed him have no way of actually knowing this. Right now, the number of peaks is two, but it could be three or even four. Granted the more peaks the less likely the scenario, but it isn’t impossible.

Further, Hubbert himself was not a pessimist when it came to energy outlook, which is really what the topic should be (after all we don’t like oil because it is oil, but because is a cheap and useful source of energy). Hubbert himself suggested a switch over to nuclear as a solution to the eventual decline in the production/availability of oil. And we are now seeing some companies starting to look towards that option. As I noted some firms are testing the NRC’s new permitting policy.

Finally let me address yet again this common complaint.

So, what will Rueben be doing in 10 years? Don’t know, well he must be dead in 10 years. What job will he have in 5 years? Not sure? Then he must be unemployed. Will he be in the same living quarters he is now? Oh, he must be homeless then. I hope the point is clear, simply because the solution is not obvious years before a change takes place does not mean there is no solution. It semed inexorable that Malthus’ numbers were going to lead to massive world wide starvation and misery…didn’t happen. Did anybody see the solution (improvements in technology) when Malthus put forth is theory? My guess is no. Many people thought Ehrlichs views on feeding humanity were inescapable, but he was totally and completely wrong. The Club of Rome figured millions would die as we ran out of resources, but they too were wrong. Now none of this means that the Hubbert/Peak Oil/End of the World believers have to be wrong. But do you want to bet they are right? The doom-n-gloomers have a poor track record, but hey, maybe this will be the big success for them.