A Berkeley watchdog organization that tracks military spending said it uncovered a strange U.S. military proposal to create a hormone bomb that could purportedly turn enemy soldiers into homosexuals and make them more interested in sex than fighting. Pentagon officials on Friday confirmed to CBS 5 that military leaders had considered, and then subsquently rejected, building the so-called “Gay Bomb.”

Edward Hammond, of Berkeley’s Sunshine Project, had used the Freedom of Information Act to obtain a copy of the proposal from the Air Force’s Wright Laboratory in Dayton, Ohio. As part of a military effort to develop non-lethal weapons, the proposal suggested, “One distasteful but completely non-lethal example would be strong aphrodisiacs, especially if the chemical also caused homosexual behavior.” The documents show the Air Force lab asked for $7.5 million to develop such a chemical weapon.

“The Ohio Air Force lab proposed that a bomb be developed that contained a chemical that would cause enemy soliders to become gay, and to have their units break down because all their soldiers became irresistably attractive to one another,” Hammond said after reviwing the documents. “The notion was that a chemical that would probably be pleasant in the human body in low quantities could be identified, and by virtue of either breathing or having their skin exposed to this chemical, the notion was that soliders would become gay,” explained Hammond.

The Pentagon told CBS 5 that the proposal was made by the Air Force in 1994. “The Department of Defense is committed to identifying, researching and developing non-lethal weapons that will support our men and women in uniform,” said a DOD spokesperson, who indicated that the “gay bomb” idea was quickly dismissed.

Pam Spaulding notes that the story has been circulating for some time and that this project was considered along with other bizarre plans such as a weapon that would inflict severe halitosis and another that would make soldiers sensitive to sunlight. My guess — and it is only that — is that “considered” is likely too strong a word.

DownWithTyranny has some amusing commentary on this under the header “HOW THE REPUBLICANS LEARNED TO STOP WORRYING AND DEVELOP A GAY BOMB.” The trouble is that this happened under the Clinton administration. And rightly so.

During the time period in question, the military was very interested in non-lethal weapons for crowd control purposes as it was becoming immersed in various peacekeeping and stability operations from Somalia to Bosnia to Haiti. Finding ways to incapacitate people rather than killing them is a good idea all the way around. It stands to reason, then, that some rather silly ideas were tossed out in brainstorming sessions.

That doesn’t make the idea any less funny. Justin Gardner is encouraging you to “Leave your best one-liners in the comments.” 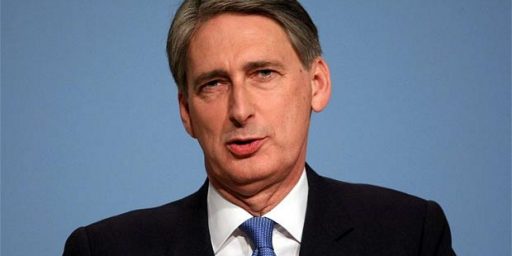