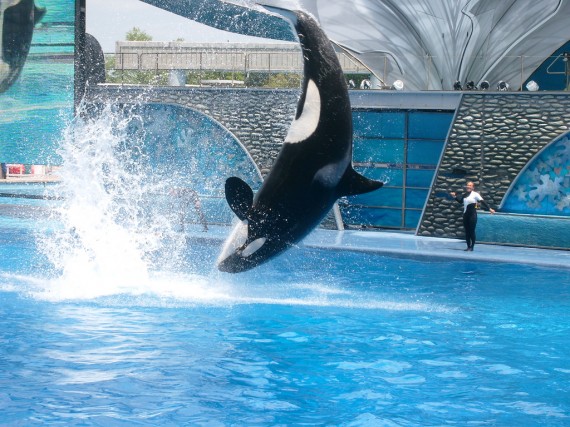 I believe this fits under the very definition of frivolous lawsuit:

A federal court is being asked to grant constitutional rights to five killer whales who perform at marine parks — an unprecedented and perhaps quixotic legal action that is nonetheless likely to stoke an ongoing, intense debate at America’s law schools over expansion of animal rights.

People for the Ethical Treatment of Animals is accusing the SeaWorld parks of keeping five star-performer whales in conditions that violate the 13th Amendment ban on slavery. SeaWorld depicted the suit as baseless.

The chances of the suit succeeding are slim, according to legal experts not involved in the case; any judge who hews to the original intent of the authors of the amendment is unlikely to find that they wanted to protect animals. But PETA relishes engaging in the court of public opinion, as evidenced by its provocative anti-fur and pro-vegan campaigns.

The suit, which PETA says it will file Wednesday in U.S. District Court in San Diego, hinges on the fact that the 13th Amendment, while prohibiting slavery and involuntary servitude, does not specify that only humans can be victims.

The plaintiffs are the five orcas, Tilikum and Katina based at SeaWorld in Orlando, Fla., and Corky, Kasatka and Ulises at SeaWorld San Diego. Tilikum, a six-ton male, made national news in February 2010 when he grabbed a trainer at the close of a performance and dragged her underwater until she drowned.

Lord only know what Tilikum will do when the lawyers tell he has no case.

FILED UNDER: Law and the Courts, Slavery