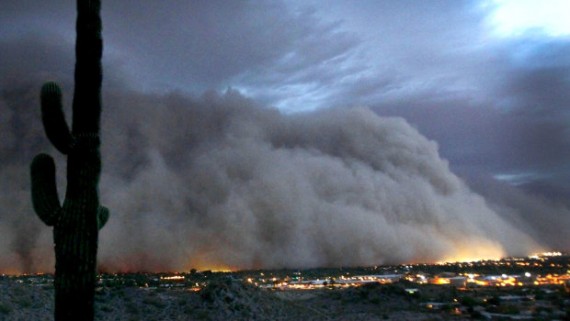 It’s called a Haboob, a name that comes from the Sahara Desert where they are quite common, last night though one hit Phoenix, Arizona:

A dust storm up to 50 miles wide and a mile high descended on the Phoenix area on Tuesday night, grounding flights, forcing drivers to stop and causing thousands of power outages.

Towering over skyscrapers and grounding flights, the wall of dust swept across the desert from the south at around nightfall, blanketing downtown Phoenix.

The National Weather Service said strong winds with gusts of more than 60 miles per hour  moved the dust cloud northwest through Phoenix and the cities of Avondale, Tempe and Scottsdale.

More than a dozen communities in the area also were placed under a severe thunderstorm watch.

The video of the storm is simply amazing:

Fortunately it seems that there were few injuries from the storm.