A new poll shows that a majority of Americans support the legalization of marijuana:

A majority of Americans thinks marijuana should be legal, a new poll finds, with support steadily increasing over the past few years.

Fifty-five percent of those surveyed thought using pot should be legal, according to a CNN/ORC International poll released Monday night, compared with 44 percent who said it should not be.

According to General Social Survey trends, this year is the first time that more Americans support legalizing marijuana than oppose it.

Most Americans also disagree that pot is physically and psychologically harmful, and by a smaller margin disagree that using marijuana leads to using other drugs. A slim majority, 50 percent to 48 percent, believe it is addictive.

Much like public attitudes toward homosexuality and same-sex marriage, this is quite a substantial change in public attitudes in a very short period of time and it’s reflected at least in part in the developments we’ve seen over recent years reducing the legal impact of marijuana possession and use.  As, this map from Wikipedia demonstrates: 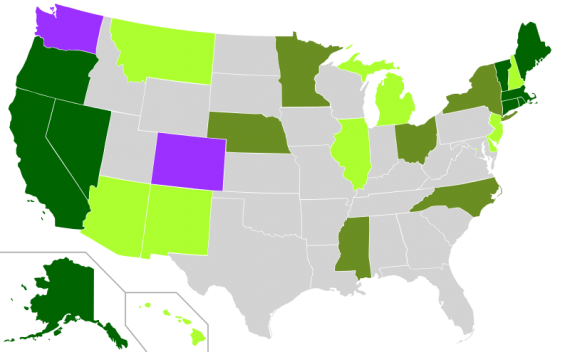