What sort of response is required to Pyongyang's ratcheting up of tensions on the Korean Peninsula? 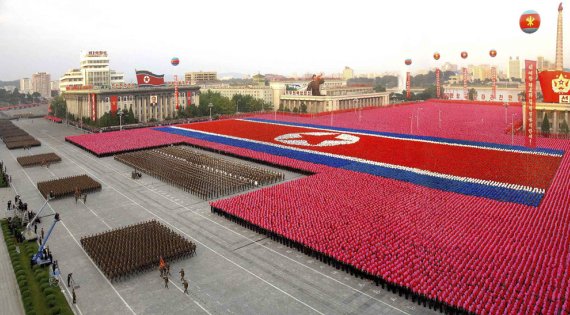 Doug has already commented on the attack by North Korean artillery on South Korea’s Yeonpyeong Island, resulting in the deaths of two South Korean soldiers and the wounding of a number of others. This action by the North Koreans is part of a presumably intentional ratcheting up of hostilities on their part that began with their sinking of the South Korean naval vessel the Cheonan, continued with the previous shelling in the area of Yeonpyeong Island, and may even include the recent revelation of a brand spanking new North Korean nuclear enrichment facility. What should our response be to these actions?

For a briefing on the U. S., South Korean, and North Korean military posture in the Korean peninsula see here (PDF).

After an appropriate period of outrage we could ignore the situation; we could offer the North Koreans additional inducements for more acceptable behavior on their part; we could offer a military response; and we could attempt to encourage the various principle actors in the tensions on the Korean peninsula among themselves.

Ignoring the situation seems to me mostly likely to provoke an increase in aggression on the part of the North. If they don’t get what they want (more money), they will undoubtedly raise the stakes: it’s worked pretty well for them so far.

Offering additional inducements merely empowers the North to continue their nuclear weapons development and their increasingly hostile actions towards the South. It would just kick the can down the road. Sometimes allowing for the passage of time is the best response; North Korea has shown few signs that it is ready to stand down from its exceedingly hostile stance.

Given North Korea’s extreme sensitivity to even the mildest of what it deems provocative actions, any offensive military response on our part could place Seoul in real jeopardy Our editorial pages frequently mention Pyongyang’s massive artillery and inventory of rockets, some possibly armed with chemical or biological warheads, all aimed at Seoul. To some extent that’s exaggerated. Seoul is likely beyond the reach of conventional artillery and it also likes at the limits of range of most of the North’s rockets. Seoul itself is probably not at risk (which explains South Korea’s blasé attitude to the North’s massed artillery and even its nuclear weapons development).

However, the Seoul environs and suburbs are and any serious military strike against the South by North Korea would undoubtedly inflict casualties on the South mounting in the tens of thousands or more.

IMO our best course of action would be to remove our forces from north of Seoul to south of Seoul. This would lessen the “tripwire” effect our forces provide there, remove them from the range of North Korean artillery and rocket attacks, and send a powerful signal to the stakeholders, i.e. North Korea, South Korea, China, and Japan, that the destabilizing effects of North Korea’s actions can be matched with destabilizing actions of our own.

South Korea is a country with nearly double the population of North Korea and an economy thirty times the size of the North’s. It’s high for South Korea to adopt a more pro-active role in normalizing its relations with the North. The presence of our troops guarding the DMZ as a stabilizing force has come to the point at which it is stabilizing things in the wrong direction.

I would prefer that we withdraw our forces from South Korea entirely but baby steps. Baby steps.