How much blame did the 70-year constitutional monarch share?

The death of Queen Elizabeth II, Britain’s longest-serving monarch, is causing a global battle royale over a central question: How do we speak honestly about the loyal servants to Britain’s powerful and historically brutal empire?

My answer? You speak the truth loudly, firmly and without hesitation. Use a microphone if you need to say it louder for those in the back.

In the wake of the queen’s death, propaganda, fantasy and ignorance are being pitted against Britain’s historical record and the lived experience of Africans, Asians, Middle Easterners, the Irish and others.

In the global north’s imagination, the queen is a symbol of decorum and stability in the post-World War II world. But to people of places that Britain invaded, carved up and colonized over centuries, the 96-year-old grandmother — and the rest of the royal family — evoke complex feelings, to say the least.

The Queen was a world-historical figure and, certainly, the passage of a woman who reigned for 70 years should spark conversations over that history.

Uju Anya, a Carnegie Mellon professor who is Nigerian, came under intense attack after tweeting Thursday, “I heard the chief monarch of a thieving raping genocidal empire is dying. May her pain be excruciating.” Those are harsh and hateful words toward the queen, but they shouldn’t be surprising — not to anyone who has truly grappled with the generational agony of families, such as Anya’s, that have suffered massacre and displacement at the hands of the British.

I have zero interest in telling the descendants of the colonized, much less an actual Nigerian-born Black woman, how they should think of the British empire or its longest-serving symbol. Anya’s tweet, while mean-spirited, had its desired effect of shifting the conversation from mourning over an old woman’s passing to the horrors committed by her country. While Carnegie-Mellon rightly distanced themselves from the intemperate tone, they also rightly defended her academic freedom.

Attiah quickly disposes of with the low-hanging fruit:

Defenders of the queen, of course, have their answer to that. They suggest she was something of a “liberator,” since decolonization occurred during her reign, and that the people thus “liberated” should be grateful. Again, the historical record is the crucial thing: When Elizabeth ascended to the throne in 1952, she inherited a Britain with a weakened grip on global power. Rebellions were gathering strength in its colonies. The economic drain from the conflicts, coupled with the growing independence movements in Africa and India, all but forced Britain to pull back.

Yet, even then, Britain under Elizabeth did not just let its prized colonies go. From 1952 to 1963, British forces crushed the Mau Mau rebellion in Kenya, forcing between 160,000 and 320,000 Kenyans into concentration camps. Kenyan tribes are suing the British government at the European Court of Human Rights for land theft and torture.

Yes, the UK was mostly post-colonial during Elizabeth’s reign. No, that was not by her choice.

Attiah’s counter to the better argument is weaker:

Royalists will argue, too, that as a constitutional, symbolic monarch, Queen Elizabeth bore little responsibility for the ills that occurred during her long reign. But symbols matter. Elizabeth willingly took on the role of representing British power and wealth. She willingly adorned herself with jewels plundered from former colonies. Her image is on the currencies of many former colonies; by stewarding the British Commonwealth, she willingly took on the symbolic, patronizing role of “white mother” to the darker peoples’ of the former empire. All while reportedly banning “coloured immigrants or foreigners” from serving in royal clerical roles until the 1960s.

Now, I would counter that she was simply doing the job she was born to do. The democratically-elected Governments of the UK made foreign policy decisions while QEII was the symbol of the people. Indeed, to the extent that she had an opinion of what those decisions ought be, she had no right to shape them and, indeed, a duty to keep them to herself. Still, if Attiah, Anya, and others want to believe that this silence implied consent or otherwise deserves scorn, that’s certainly their right.

And still others say we shouldn’t talk ill of Britain at this moment. That the past is long gone. That we should forget about it. The ugly reality is, Britain deliberately wanted to hide its crimes from newly independent countries; in 1961, it destroyed thousands of colonial-era documents so as not to “embarrass Her Majesty’s government.”

Honestly, I can’t blame them for that much, at least. The truth of the matter is that colonialism was an anachronism, at best, that continued long after its immorality was well understood. That the UK, France, and others (including, to a much lesser extent, the United States) continued to find excuses to continue holding onto their colonies is understandable; that doesn’t make it less worthy of condemnation.

I’m also living proof that the past is present.

My mother, born in pre-independence Nigeria, recalls having to celebrate “Empire Day,” marching in stadiums and singing “God Save the Queen.” Several years after Nigeria’s independence in 1960, Britain sided with the Nigerian forces to crush the Biafran secession efforts. Some 1 million people of the Ibo ethnic tribe were killed or starved to death. My grandfather, who was one of the chief financial officers of Biafra, was forced to flee the country with my mother and siblings.

Which, of course, means her ancestors were both victims of and collaborators with the colonizers. They fled because they weren’t safe from their own people.

Regardless, even though “Nine in 10 living humans were born after Elizabeth became queen,” the fact remains that these events are far from ancient history. Not only did some of the worst atrocities take place during living memory, their effects are very much still with us. It’s perfectly reasonable to talk about that even while people are mourning the loss of a grandmotherly figure.

It shouldn’t take the death of a monarch to bring this colonial history to light, but this is where we are. The public relations imagery of a dedicated, elderly grandmother devoted to her corgis, and the Hollywood-ification of the royal family, serves all too well to blunt questions about empire. When the opportunity comes to surface truth, it must be seized.

Because there’s one more way the royalists have it wrong — this conversation is about the future, too. Hagiography of Queen Elizabeth and the fading British Empire obscures the truth not only about Britain but also about our current world order, which is built on that history. We can speak the truth about that history even as we pause to wish her spirit and her family well during this transition. And then we must get back to work — to dismantle the present-day vestiges of the racist, colonial empire she so dutifully represented.

I’d argue that hateful proclamations of wishing her a painful death are both needlessly hurtful and detract from fruitful conversation. Still, more thoughtful expressions, including Attiah’s, have indeed leveraged global news coverage of a 96-year-old’s passing to bring focus on an issue that’s hardly front and center for most of us.

I’m four-square in favor of speaking the truth and certainly wish her family, dysfunctional as it often appears,* well in their time of loss. As to “dismantl[ing] the present-day vestiges of the racist, colonial empire,” I’m happy to have that conversation.

The United States is both a vestige and perpetrator of that system, after all and compounded it by perpetuating the slave trade. We’re more than four centuries in, though, and I’m not interested in returning the continent to the aboriginal peoples and calling the whole thing off. So, I’m not sure what the end state looks like. 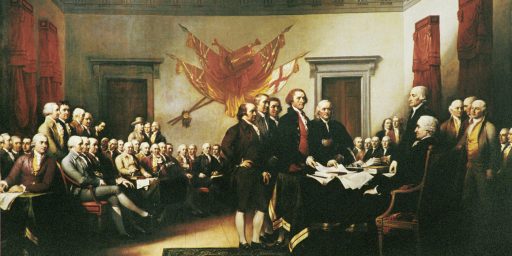