Religiosity of the American Professoriate

Reading journal articles, so you don't have to. 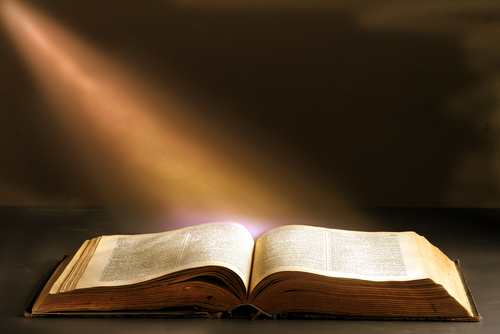 My post about religiosity and higher education led to read another journal article:  “The Religiosity of American College and University Professors” by Neil Gross Solon Simmons which was published in Sociology of Religion (Summer 2009, Vol. 70, Issue 2, pp.101-129).

Mostly I thought I would share some of the key descriptive data from the piece and some of the conclusions.  Also, for the purpose of comparisons, one can look to Gallup’s polling on religion in the overall population.

First, here is the breakdown on belief in God:

We can compare this to the Galllup (link above) national numbers. In regards to the question “Do you believe in God or a universal spirit” the public response was 91% yes, 8% no, and 1% no opinion in May of 2011.  A breakdown of that question in 2010 had 80% believing in God, 12% in a universal spirit and 6% belief in none (1% other, 1% no opinion).  Compared to the above numbers for professors, there is clearly more lack of belief, but not radically so (9.8% v. 8%).  The fact that Gallup did not ask the agnosticism question makes direct comparison difficult.

A better measure might be comparisons on question of the Bible.  In May of 2011, Gallup found that 30% of the general population believed that the Bible was the “actual word of God” while 49% believed it to be “the inspired word of God but not everything in it should be taken literally” and 17% viewed it as “an ancient book of fables, legends, history, and moral precepts recorded by man” (3% had no opinion).  I would note that according to another Gallup poll, roughly 40% of the population considers itself “conservative” or “very conservative.”  I strongly suspect that there is a significant coincidence between the 30% who consider the Bible the “actual word of God” and those who view themselves as “conservative.”  Further, I suspect, therefore, that we are talking here about the base of the GOP, and hence (at least in part) the success of Santorum at the moment in the primaries (but I digress).

According to the study by Gross and Simmons we have numbers on the same categories for professors:

only 5.7 percent of the respondents say  the Bible is the “actual word of God,” with 48.3 percent describing it as “an ancient book of fables, legends, history, and moral precepts.”  About 39.5% of respondents are of the view the Bible is “the inspired word of God.”  Roughly 7 percent refused to answer this question (119).

I say, by the way, “not surprisingly” as a literal interpretation of the Bible as the perfect, inerrant word of God leads to a number of problems for any number of academic disciplines including (but not limited to) biology, physics, geology, history, psychology, and sociology.  Even if we ignore the question of who is right for the sake of remaining focused on the descriptive stats for now, it should be easy to see how what these conflicts might be.

Back to descriptive stats.  Here are the numbers by discipline: 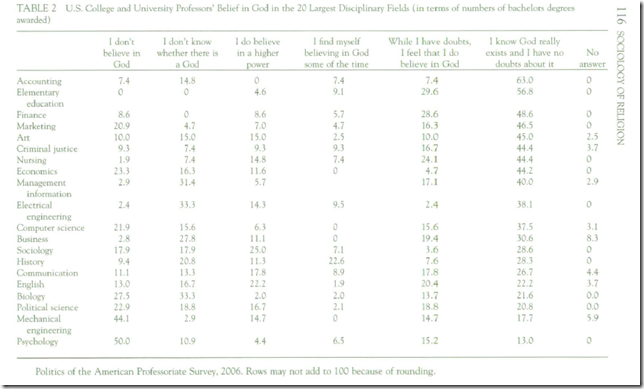 Interestingly, the number of those who identify with being “born again” is low:  “Overall, 18.6 percent of respondents to our survey said the term ‘born-again Christian’ describes them at least slightly well” (118).    This number, however, is not as low as it sounds in comparison to the population.  The aforementioned Gallup poll found that 42% of Americans identified as Protestant and only 42% of Protestants identify as “born again” (with 53%  not self-identifying in that way).  In other words, of the plurality of the population that identifies as Protestant, less than half identify as “born again”—meaning that the general prevalence of self-identified born again Christians is also around 18ish%.  However, as the study of the professoriate notes:  the incidence of born again Christians at elite-level doctoral institutions is 1% (although it is  24.5% at four-year schools).

Here’s the breakdown of professors by religious affiliation: 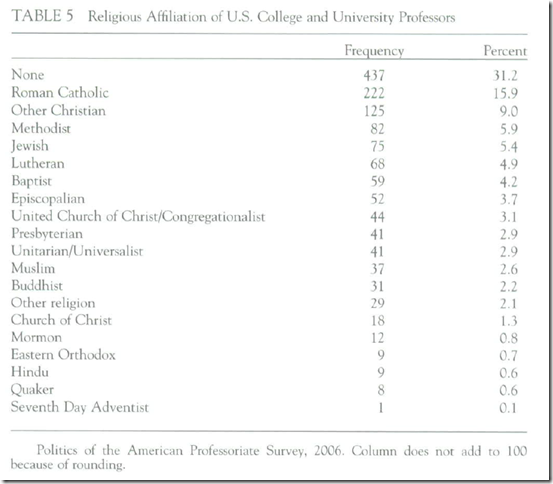 From the article’s conclusion: “…even at the elite schools. there are more professors who are religious than who are nonbelievers, which suggests that in academe—as in American society more generally—secularization has entailed more the privatization of religious belief and its retreat from the public square (notwithstanding the political mobilization of conservative Christians over the past quarter century) than its elimination (14).”

Also:  “we have shown that religious believers are more common in the ranks of American faculty than many strands of social-scientific analysis—and much popular discourse—would suggest” (126).

“Old book with Ray of light” image via Shutterstock.

A BIBLICAL WORLDVIEW IN A MODERN WORLD