I seemed to have baffled the Energy Sec with basic question – Where does oil come from?

For those of you who can’t watch, Rep. Barton asks Energy Secretary Steven Chu “How did all the oil and gas get to Alaska and under the Arctic Ocean?” As Dr. Chu begins to describe plate tectonics and continental drift, Barton interrupts by asking “Isn’t it obvious that Alaska and the Arctic Ocean were a lot warmer?” As Dr. Chu explains that what is now Alaska actually drifted north over millions of years, Rep. Barton just laughs. And brags about “stumping” Dr. Chu on his YouTube channel.

Clearly, though, a cursory look at the history of continental drift over the past 200 million years shows that Alaska did, in fact, drift north and was warmer as a consequence of being further south when the plants and animals that made up the initial organic matter that would later become oil were alive.

One would think that Rep. Barton would want to hide this embarrassing video away, but no–he’s trumpeting it. Doesn’t he have staffers? 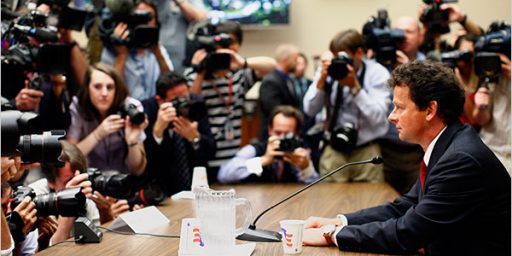