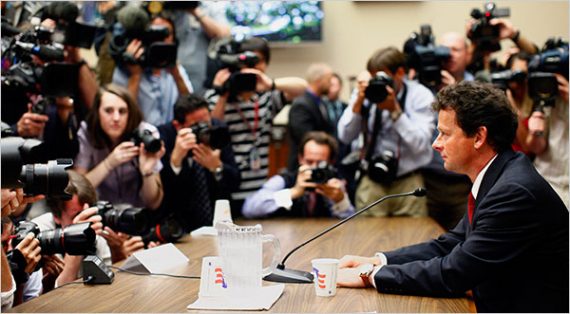 The Congressional hearings on the BP oil spill are just starting, but we’ve already got the first headline of the day:

WASHINGTON – A leading House Republican accused the White House Thursday of a “$20 billion shakedown” of oil giant BP by requiring the company to establish a huge fund to compensate those hurt by the Gulf Coast oil spill.

Rep. Joe Barton made the assertion at the outset of a House hearing where BP’s chief executive officer, Tony Hayward, was appearing for the first time before Congress.

Facing Hayward at the witness table, the Texas Republican congressman said, “I’m ashamed of what happened in the White House” on Wednesday. Barton was referring to the agreement that President Barack Obama announced with BP for establishment of a $20 billion relief fund.

Markey said the compensation fund was “not a slush fund, not a shakedown. … It was the government of the United States working to protect the most vulnerable citizens that we have in our country right now, the residents of the Gulf.”

“It’s BP’s spill,” the Massachusetts Democrat said, “but it is America’s ocean, and it is America’s citizens who are being harmed. … No, this is not a shakedown of the company.”

Already, the White House is out with a statement:

What is shameful is that Joe Barton seems to have more concern for big corporations that caused this disaster than the fishermen, small business owners and communities whose lives have been devastated by the destruction. Congressman Barton may think that a fund to compensate these Americans is a ‘tragedy’, but most Americans know that the real tragedy is what the men and women of the Gulf Coast are going through right now. Members from both parties should repudiate his comments.

This strikes me as an incredibly stupid statement on Barton’s part. As I noted yesterday, there are plenty of legitimate questions that need to be asked about the escrow fund that was announced by the White House. However, there are no apologies necessary to BP, or to Tony Hayward. Ultimately, there are responsible for the damages resulting from the destruction of the Deepwater Horizon and that seems to be what the escrow fund is intended to cover.

More importantly, though, the sheer political stupidity of apologizing to a company that is responsible for the worst environmental disaster in American history. Barton is unlikely to pay a political price himself since he has represented the same Texas Congressional District since 1985, but I doubt you will see any other Republicans joining Barton in his apologia, aside from the Rush Limbaugh’s of the world.

Update: At the start of the afternoon session of the hearing, Barton retracted his earlier statement:

“I apologize for using the term ‘shakedown’ with regard to yesterday’s actions at the White House in my opening statement this morning, and I retract my apology to BP. As I told my colleagues yesterday and said again this morning, BP should bear the full financial responsibility for the accident on their lease in the Gulf of Mexico. BP should fully compensate those families and businesses that have been hurt by this accident. BP and the federal government need to stop the leak, clean up the damage, and take whatever steps necessary to prevent a similar accident in the future. I regret the impact that my statement this morning implied that BP should not pay for the consequences of their decisions and actions in this incident.”