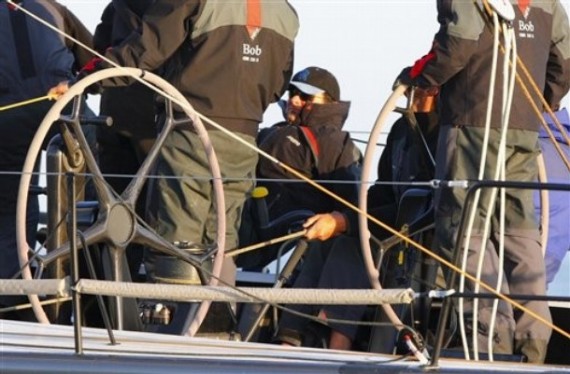 Just call it the latest in a two month series of public relations disasters by the CEO of BP:

(AP)  In what one environmentalist described as “yet another public relations disaster” for embattled energy giant BP, CEO Tony Hayward took time off Saturday to attend a glitzy yacht race around England’s Isle of Wight.

As social networking sites like Twitter and Facebook lit up with outrage, BP spokespeople rushed to defend Hayward, who has drawn withering criticism as the public face of BP’s halting efforts to stop the worst oil spill in U.S. history.

Spokeswoman Sheila Williams said Hayward took a break from overseeing BP efforts to stem the undersea gusher in Gulf of Mexico so he could watch his boat “Bob” participate in the J.P. Morgan Asset Management Round the Island Race. The 52-foot yacht is made by the Annapolis, Maryland-based boatbuilder Farr Yacht Design.

The annual one-day race is one of the world’s largest, attracting more than 1,700 boats and 16,000 sailors as world-renown yachtsmen compete with wealthy amateurs in the 50-nautical mile course around the island.

Robert Wine, a BP spokesman at the company’s Houston headquarters, said it was the first break that Hayward has had since the Deepwater Horizon rig exploded April 20, killing 11 workers and setting off the undersea oil gusher.

“He’s spending a few hours with his family at a weekend. I’m sure that everyone would understand that,” Wine said Saturday. “He will be back to deal with the response. It doesn’t detract from that at all.”

Wine described the race as “one of the biggest sailing events in the world and he’s well known to have a keen interest in it.”

He said Hayward will be returning to the United States, though it’s unclear when.

I don’t begrudge Hayward leisure time, but the public relations image that this creates in the mind of most people is pretty bad.