As apparent plea negotiations continue regarding the charges against Congressman Jesse Jackson Jr, reports have surfaced that the Congressman wants something in exchange for agreeing to resign from Congress:

CHICAGO (FOX 32 News) -Sources tell FOX 32 News that Congressman Jesse Jackson Jr. is willing to give up his 2nd Congressional District seat if he’s given disability when he steps down.

Jackson Jr. was re-elected to his tenth term but last month, sources say, he applied for a disability package–what could be his only income

if he resigns. It is expected to take a couple of weeks for Congress to approve or deny the request.

His house on 72nd Street in Chicago is part of the federal government’s investigation into allegations that Jackson Jr. misused campaign funds

. Sources say Jackson allegedly spent $20,000 to renovate and buy furniture for the family’s home in Chicago, not their 5-bedroom Victorian home in Washington D.C.

The basement in the Chicago home has five televisions and a number of printers and copying machines, sources say. Most of the equipment was purchased in the mid-90’s when Jackson was first elected, but because of flooding a couple of years ago, most, if not all, was replaced.

The Wall Street Journal reported Tuesday that the congressman’s wife, Alderman Sandi Jackson, is now being investigated because she is a consultant for Jackson’s campaign operation and is paid monthly. Sources say that the alderman met with the Justice Department one time and was asked a couple of questions unrelated to any federal investigation involving her or her husband.

A Rolex watch is also part of the case against the congressman. Our sources say that the federal agents want to know where Jackson got $42,000 to pay for the watch he purchased for the woman he was having an affair with.

I believe the appropriate word here would be chutzpah. 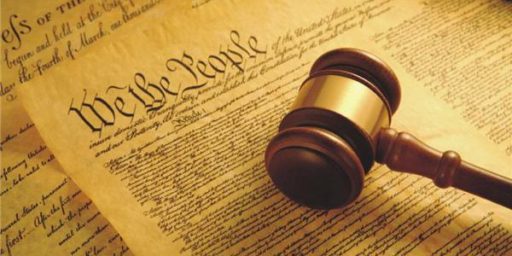 SCOTUS Sending A Signal On The Commerce Clause And ObamaCare?