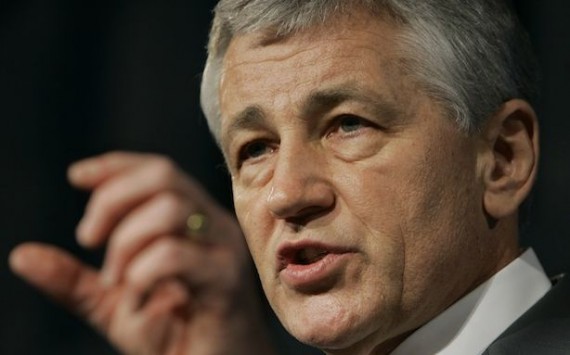 My latest for The Atlantic, “No Longer the ‘Party of Eisenhower and Reagan’” argues that Republican opposition to defense secretary nominee Chuck Hagel reveals just how far the party’s thinking has drifted on foreign policy. The kicker:

Lindsey Graham notwithstanding, Hagel’s views on most foreign policy issues of the day are well in the mainstream of the professional foreign policy establishment. It’s why so many legends of the business — Brent Scowcroft, Colin Powell, Zbigniew Brzesinski, Robert Gates, Jim Jones, and so many more — have lauded his nomination.

Problematically, while Scowcroft, Powell, and Eisenhower are admired by professionals in their field, their party’s leadership views them as Republicans in Name Only — if not outright apostates. It’s a status they share with Richard Lugar, George H.W. Bush, Jon Huntsman, and, yes, Chuck Hagel.

Either the Republican Party has to re-embrace its traditional foreign policy agenda, or those of us who have been left on the outside looking in will have to conclude that it’s no longer our party.

While the transition has been remarkably fast, today’s Republican Party is simply not the party of Dwight Eisenhower or even Ronald Reagan. Scowcroft advised Presidents Nixon, Ford and George H.W. Bush. Hagel and Huntsman both served in the Reagan administration. But, just as the Tea Party is now the de facto domestic policy face of the GOP, the neocons are its foreign policy face.

Unless there’s a course correction and soon, those of us who describe ourselves as “Eisenhower Republicans,” “Chuck Hagel Republicans,” or “Jon Huntsman Republicans” will have to face up to the fact that the modifier negates the noun.