Yesterday's encounter between Jon Huntsman and Newt Gingrich was less than it could have been. 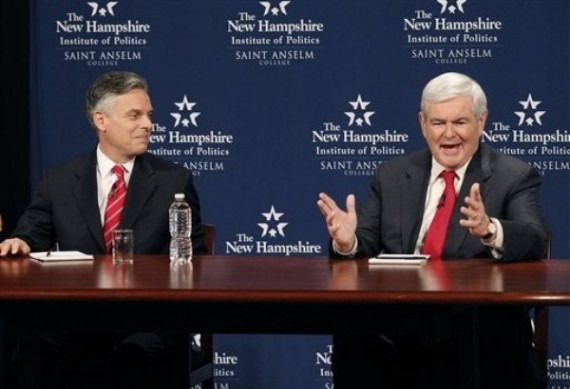 As I noted yesterday, Jon Hunstman and Newt Gingrich met at St. Anslem’s College in New Hampshire for what was billed as a “Lincoln-Douglas Debate” on national security and foreign policy. It wasn’t broadcast live, though, and for those who missed the livestream the promised 8pm airing on C-Span ended up getting pushed back nearly two hours since Congress apparently stayed in session longer than anticipated. In any event, though, the exchanges ended up being less a debate than extended discussion during which there wasn’t quite as much disagreement as we’re used to in this campaign:

MANCHESTER, N.H. — The meeting of two presidential candidates here today was billed as a successor to the Lincoln Douglas debates, but turned out to be a festival of self-congratulation intended less to tease out differences between Newt Gingrich and Jon Huntsman than simply signal their status as serious men.

“This is what we should have a lot more of because this is substantive,” Gingrich said. “We’re a country that’s in enormous trouble an we need leaders who are willing to talk to citizens.”

“This is not a Hollywood game, this is not a reality show: this is reality,” Gingrich said, drawing a crack from Huntsman about his plans to participate in a debate moderated by television personality Donald Trump.

“We’re always looking for winners and losers in these things, but I think the winners might well be the American people,” Huntsman said after the debate.

The 90-minute talk at St. Anselm College, moderated by local Republican operative Patrick Griffin, centered on national security and foreign policy, and the two men ranged widely across Asia and the Middle East. The debate showed a few of their differences – Huntsman, notably, favors a rapid withdrawal of troops from Afghanistan – but it lacked the animating point of the 1858 debates on which it was modeled: a core disagreement.

Indeed, Gingrich and Huntsman agreed so often that two members of the press, and Huntsman’s young daughters, dozed at points during the 90-minute debate. Most disagreements were hard to detect, and quickly papered over. After the debate, Huntsman was pressed repeatedly on whether he agrees with one of Gingrich’s most dramatic claims: That the leaders of the Islamic Republic of Iran would use “nuclear weapons in a heartbeat” and could not, for reasons of religious fanaticism, be deterred by the threat of massive retaliation.

Huntsman, pressed repeatedly by reporters after the debate on whether he agreed with that view, which is shared by former Sen. Rick Santorum, did not answer directly.

“Their language is provocative enough to give us serious concern about what their intentions are longer term,” he said.

Indeed, Huntsman went out of his way to align himself with the new frontrunner, and against Mitt Romney, who’s shut him out of the relatively moderate, Northeastern space he’d sought to occupy. On Sunday, Huntsman contrasted himself – “a practitioner” – with Gingrich – a “professor.” Monday he was blowing kisses.

“Based on Speaker Gingrich’s excellent performance, he is definitely, definitely at the top of my shortlist of people to consider for the vice presidency of the United States,” Huntsman said.

Both men obviously had reasons for going into this encounter. For Huntsman, at the top of the list there’s the simple fact that any media attention, especially in New Hampshire, helps a campaign that doesn’t have nearly the resources or media exposure of a Mitt Romney or Newt Gingrich. Additionally, national security is an area where Huntsman obviously knows his stuff, and an extended discussion on this topic fits firmly within his wheelhouse and reinforces the image he’s tried to project of being the calm, competent, experienced candidate. For Gingrich, the motivations appear to be two-fold. Like Huntsman, Gingrich seems to excel at this one-on-one exchanges, especially when he’s not being asked adversarial questions. At the same time, though, I’m compelled to agree with the theory Jazz Shaw put forward last night when he suggested that Gingrich’s decision to share a stage with Huntsman was motivated at least in part by the motivation to potentially undermine Romney in New Hampshire by boosting Hunstman. It’s unlikely that many Romney voters would see Newt as an acceptable second choice, Huntsman however would be another story. Even if Huntsman’s rise just causes Romney to under perform on Primary Day, that works to Gingrich’s benefit.

As for the debate itself, there were several interesting moments, some of which might have surprised Republican voters used to hearing Gingrich pontificate about foreign policy in a multi-candidate debate. On Iran, for example, Gingrich seemed to essentially admit that military action would do very little to stop or deter the Islamic Republic from going forward with a nuclear weapons program. This is a point that critics of military action against Iran have been making for awhile, of course, but it was interesting to hear it coming out of the mouth of Newt Gingrich of all people. Of course, even after conceding that point Gingrich argued that we should use a variety of methods to undermine the regime in Tehran. He also repeated the standard apocalyptic view on the right that the next President would need to make a choice between helping Israel attack Iran and standing by while Israel was hit by Iranian nuclear weapons. The illogic of this position didn’t seem to occur to him or, unfortunately, to Huntsman

Huntsman himself was his useful skillful self on this issue, which wasn’t surprising.  He reiterated again his position that the time to leave Afghanistan had long passed, and stressed the importance of developing our ties with India to counterbalance Pakistan, which he referred to as being a nearly failed state. On China, even Gingrich conceded that Huntsman was more knowledgeable on that subject, and that became clear when Huntsman pointed out that 2012 would see not only a U.S. Presidential Election but also a serious of Party meeting in China that will result in the most sweeping generational leadership changes in Beijing in decades. The rise of this “fifth generation” as Huntsman called it is likely to have serious implications for China and the United States.

The frustrating thing about Huntsman, though, was the fact that he didn’t really challenge Gingrich on areas where challenges were called for. There was virtually no disagreement on Iran, for example, even though its pretty clear that Huntsman does not share Gingrich’s view of how the U.S. should handle Israel vis a vis that nation. When Gingrich asserted that the United States had abandoned Hosni Mubarak too quickly in February, Huntsman chose not to respond at all. Perhaps it was the format of the encounter itself, but the whole thing seemed designed to create as few fireworks as possible, and thus few interesting contrasts between the candidates.

David Weigel had apparently intended to live-blog the forum, but instead posted just one update during the entire 90 minute affair that I think sums things up quite well:

There’s a reason you don’t often host “debates” between two people who agree. Huntsman and Gingrich have fundamentally different foreign policies — he wants out of Afghanistan, Gingrich doesn’t. Neither man is exploiting the difference, and a moderator isn’t pushing them. It’s in Huntsman’s interest to keep mentioning the need for “a foreign policy based on economics.” It’s in Gingrich’s interest to have this debate at all, because Huntsman naturally takes support away from Romney if he manages to surge. The only concrete position I hear so far is agreement, from Huntsman, that “all options” are on the table against Iran. Gingrich is in full-on conversational wise man mode. “This is,” he says of Pakistan, “a much harder problem than anybody in official Washington in either party is willing to deal with.” Also, “I was called in to read the intelligence reports on Iran’s WMD program.”

In other words, it may have been called a “Lincoln-Douglas Debate” but it was nothing like the legendary 1858 contest for Senate that inspired a nation. For one thing, the format of the Lincoln-Douglas Debates had one candidate speaking for 90 minutes, the other speaking for 60 minutes, with a 30 minute rebuttal for the first candidate if desired. While yesterday’s forum was more open than the normal debates we’ve seen this cycle, it wasn’t anything like that (although I doubt a 180 minute debate would go over very well in the modern age). The bigger difference, though, is that the Lincoln and Douglas strongly disagreed with each other over the main issue of the election, the expansion of slavery into the Western Territories. Both men were passionate and skilled public speakers and strong advocates for their position. That’s wasn’t what this was. This was, as Weigel notes, two guys who don’t really agree with each other a whole lot papering over those differences for 90 minutes. That’s neither interesting television nor very helpful for voters seeking to make a choice between people with very different points of view.

Peter Ingemi was at the debate has a bunch of pictures and interviews with some members of the audience that are worth checking out, and he summed the affair up this way:

I talked to many people in the crowd. All agreed they like this format, all agreed both should do more of these. I think that Newt helped himself but helped Huntsman more.

Romney was the biggest casualty, if Huntsman is considered a viable alternative to Mitt that’s where his votes would come from. I think it was a huge mistake for him to run by hitting conservatives and tea party guys early, but that’s what got him the MSM positives early.

Whoever told him that was a good way to play, sold him a bill of goods.

I’d agree with the idea that we could use more debates like this, but if they’re going to occur, the candidates involved need to do a better job of explaining their differences rather than just seeming to agree all the time. Drawing contrasts, after all, is what primary fights are supposed to be all about.

If you would like to watch the debate, though, here’s the whole thing: