I haven’t paid much attention to the hubbub over the remake of the not-all-that-good-the-first-time Stepford Wives, other than to get a general sense that the critics aren’t impressed. Apparently, though, Nichole Kidman’s follow-on choice was far worse:

The Australian – Nicole in hot water 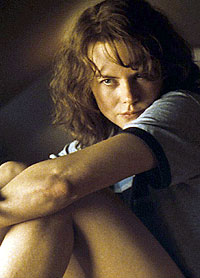 NICOLE Kidman is in for a rocky week if the US supermarket tabloid The National Enquirer is to be believed. [And it is! -ed.]

Her latest movie, Birth – made after the soon-to-open Stepford Wives – see the Australian Oscar winner Kidman play a young widow who falls in love with a 10-year-old boy she believes is the reincarnation of her dead husband.

But executives from New Line Cinema, the production company, are reportedly considering pulling the $US50 million ($72 million) flick because of scenes showing Kidman bathing naked with the young lad.

Sources told the Enquirer that the film had undergone a string of creative battles and rewrites.

Now executives have told the film’s executive producers that the two scenes – showing Kidman and the boy stripping off and kissing in the bath – are “borderline disgusting” to watch.

All I know is that, if this is “borderline disgusting,” I’d hate to see the real thing.

One has to ask: What was Nichole Kidman thinking? She’s beautiful, talented, wealthy, and widely considered one of the best actresses in the business. Can’t she exercise a bit better judgment over script selection?