Mitt Romney made headlines back in March when he referred to Russia as “our number one geopolitical foe,” a comment that was immediately criticized by Russian leaders and many members of the foreign policy establishment. Additionally, as The New York Times noted in an article last month, Romney’s remarks and his continued hard-line position toward Russia have been the subject of controversy within Republican foreign policy circles, with even some of Romney’s own advisers quite obviously disagreeing with their boss on the matter. Any chance those advisers might have influenced Romney to tone down his rhetoric, though, seems to have gone out the window now that Romney has essentially doubled down on his previous comments:

Showing no sign of backing down on his hawkish stance on Russia, Mitt Romney said in a radio interview broadcast on Tuesday that the country is continuing “to pursue a course which is antithetical” to that of the United States.

In the interview with Fox Radio, Romney repeated his earlier characterization of Russia as “geopolitical foe” – a position that has raised questions among Democrats and even some Republicansabout whether he remains stuck in a Cold War mindset. He sought to put the notion to rest, but did not deviate from his earlier controversial assertions.

“The nation which consistently opposes our actions at the United Nations has been Russia,” Romney said. “We’re of course not enemies. We’re not fighting each other. There’s no Cold War, but Russia is a geopolitical foe in that regard.”

Romney’s remarks came as President Obama has been meeting with Russian leader Vladimir Putin at Mexico’s G-20 summit to try to seek common ground over how to deal with Syria, one of Russia’s allies. Romney blasted Obama for what he called an ill-advised concession on withdrawing missile-defense sites from Eastern Europe, which he called Putin’s “number one foreign-policy objective.”

“I think it was an enormous mistake to give them that and what he got in return shows the extraordinary naiveté of a presidency that does not understand the power of resolve and strength,” he said.

Mitt Romney was roundly mocked in March by the mainstream media and many so-called foreign policy wise men for saying Russia was America’s top “geopolitical foe.” He was accused of attempting to revive the Cold War and an derided for his lack of understanding of international nuance by those who preferred President Obama’s much cooler approach to the regime of Vladimir Putin which has included a failed “reset” and a hot microphone promise by the president that he would be able to be more “flexible” in his second term in dealing with Russia’s demands. But three months later, with Russia sending missile defense systems to Syria, it would appear that Romney’s evaluation was right on target.

The announcement on Friday that Russia would be sending advanced missiles to the beleaguered regime of Bashar al-Assad was a body blow to those who have been trying to convince the world that Putin was prepared to play ball with the West. The missiles are intended to help Assad fend off any Western intervention in Syria as the dictator continues to repress dissent and slaughter his people. The move is troubling in of itself as it will embolden Assad to stand his ground against international pressure and make any intervention to stop the humanitarian crisis there much more difficult. But it also reveals what has long been obvious to anyone paying attention to Moscow’s foreign policy ambitions in the last decade. Putin’s goal is to reconstitute as far as possible the old Soviet sphere of influence in the Middle East. As far as he is concerned, the discussion about human rights in Syria is irrelevant. Syria is his client state, and like his Soviet predecessors, he is determined to preserve it at any cost, something that will also have serious implications for the West’s attempt to stop Iran’s nuclear program. If that isn’t a geopolitical foe for the United States, then what exactly would one look like?

While, as James Joyner pointed out shortly after his  initial comments, there is some merit in what Romney had said at that time, it strikes me that approaching Russia in the hawkish, hostile, confrontational manner that seems to be at the core of where Romney is coming from is a mistake. For one thing, it’s based on the idea that Russia is essentially the same thing as the former Soviet Union and that we have to deal with them in the same manner we dealt with the likes of Leonid Brezhnev. It’s a common belief inside the GOP, especially among the GOP base, but despite the fact that Vladimir Putin was once in the KGB and often seems to act in a manner reminiscent of Soviet leaders in the past, it’s largely not true.

Take Syria for example. Tobin is not alone in his belief that Russia’s policy toward Syria is essentially motivated by the same Soviet-era expansionism that led Moscow to have close ties with leaders like Gadhafi, Nasser, and Bashar Assad’s father and then shower them with Soviet-era weaponry. No doubt, the Russians do enjoy the access they get to a warm water Mediterranean port from Syria, but as I noted earlier this month, there are other things motivating Russia’s policy toward Syria, some of which actually have merit. Ascribing Russian intransigence on this issue solely to malevolence, while ignoring the possibility that we ourselves may be missing a bigger issue about what’s going on in that country, is the height of arrogance.

There is, sadly, no magic formula for bringing countries in line with American foreign policy objectives: it takes hard work, time, and, perhaps most importantly, a good faith effort. If one’s entire policy, like Zarate and Moore’s, is predicated on treating a country with hostility and on undermining its current political arrangement, the result will be an increase in tension and a decrease in cooperation. You could, of course, argue that the Kremlin’s position is so weak and compromised: that rolling the dice is worthwhile, that America’s long-term gains would be worth the short-term fallout. But Zarate and Moore don’t even acknowledge that there would be any short term-losses: it’s a simple equation in which confrontation -> more democracy -> greater Russian cooperation.

I’m highly skeptical that Russia and America will ever fully agree on the major foreign policy issues because their interests are so different: the countries, in case we forget, occupy radically different geographical and economic positions, and a certain (probably significant) amount of tension in the relationship is unavoidable. In case we forget, the Yeltsin government, about as pro-Western a government as Russia’s ever likely to get, was also strongly opposed to the Western intervention in Yugoslavia, waged a horrifically brutal and bloody war in the North Caucasus, and did its best to maintain influence throughout the post-Soviet space. The reset, for all its many faults, hasn’t been the titanic failure its antagonists make it out to be. While it hasn’t exactly been a smashing success, either, if you think the reset was a failure wait till you see what a policy of deliberate antagonism looks like.

That, I believe, is where the problem with Romney’s apparent approach to Russia lies. Let’s accept for the moment the argument that they are a “geopolitical foe,” as James notes in the article I linked above that’s fairly obvious from the evidence. We’re a Great Power, they are a slightly-less Great Power and while they’ve certainly lost influence in the world they do have interests, and those interests are not always in line with ours and probably never will be (then again, we have allies with interests that aren’t always in line with ours as well.) This really shouldn’t be a surprise. Did anyone actually think that after the Soviet Union collapsed, the United States and Russia would suddenly see eye-to-eye on every major issue in the world? If they did, they were laboring under some very unrealistic expectations.

So, yes, Russia is a rival in some respects, but not in all respects. The question is how we approach them on issues where our interests, while perhaps not necessarily identical, are at the very least congruent and pointing in the same direction. The approach that Mitt Romney seems to want to take is one that involves confrontation and hostility toward a nation that, historically, has not always reacted well to hostility and confrontation. That doesn’t strike me as an approach that is likely to lead to good results. 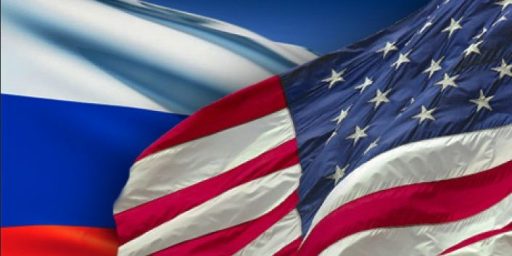 Russia Our “Number One Foe”?