When Dan Drezner tweeted "I'm not going to read anything dumber than this today," my inclination was to scoff. He actually undersold it. 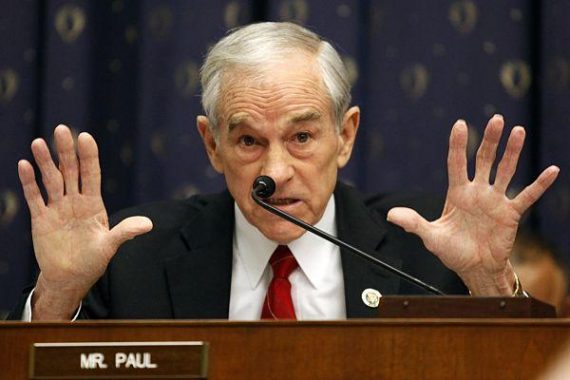 When Dan Drezner tweeted “I’m not going to read anything dumber than this today,” my inclination was to scoff. After all, it wasn’t even noon and the Internet is vast. When I followed the link to a piece by Michael Scheuer subtitled, “Ron Paul maybe a long shot in November, but he’s America’s best bet on foreign policy,” though, my hopes increased significantly. I wasn’t disappointed.

The setup actually isn’t that bad:

Open up any newspaper to see the mess America has sunk itself into around the world: for example, facing off with China over a lone, non-American dissident whose safety has no relation to U.S. security. Yet today, Paul’s call for staying out of other people’s wars unless genuine U.S. national interests are at stake is deemed radical, immoral, even anti-American. Amazing.

If elected president, Paul’s most valuable contribution to a prosperous and secure American future might well lie in his application of a noninterventionist foreign policy, following the wishes of George Washington and the other founders.

Most crucial today is the principle that foreign interventions when no genuine U.S. interest is at risk will yield lost wars, deep debt, and decreased domestic liberty. These common-sense principles were the key to national security in the early republic and would regain that status in a Paul presidency.

A President Paul would infuse these principles into U.S. foreign policy and produce a noninterventionist doctrine: far fewer unnecessary and costly wars, far fewer dead soldiers, and far greater U.S. national security. This is a workable, adult approach to the world — especially the Muslim world — unlike the adolescent approach America’s bipartisan governing elite has hewed to for decades.

Leaving aside the fact that Ron Paul is at best a crank and quite possibly crazy, there’s not much to disagree with here. While Paul’s brand of non-interventionism is too dogmatic for my tastes, I’m fully on board with the idea that we should at least start with a presumption against going to wars and that we should go to war only when doing so is crucial to advancing America’s vital interests. I wouldn’t turn the keys to the executive branch over to Ron Paul to get there, but it would be tempting.

Alas, the argument soon goes off a steep cliff.

What the founders and Paul advocate, and what the U.S. political elite have forgotten, might be termed the “Schoolyard Rule.” Most of us, in the halcyon days of youth, learned at recess that every action elicits a reaction: Push someone in the schoolyard, and you will be pushed back. We also learned that a single, cavalier push meaning little to you might quickly turn into a bigger fracas, complete with cuts, bruises, or worse, until Sister Mary Lawrence and her metal-edged yardstick arrived to stop the fight and restore order.

We also learned the Schoolyard Rule’s corollary: If you are pushed during recess, you better push back — even if the instigator is bigger — and hope that the good sister arrives to save your bacon. If you do not push back, the pain you receive becomes a daily occurrence. Militant Islamists assiduously apply this corollary to defend a Muslim world they perceive as too-long passive in the face of murderous superpower pushing. The Islamists are pushing back and depending on Allah — in the role of Sister Mary Lawrence — to give eventual victory to the Muslim David.

But, really, that’s just a fanatic’s interpretation of a fanatical worldview; it really has little to do with a President Paul.

This action-reaction lesson is a key part of a youngster’s practical education, and in the course of his or her pre-college schooling the Schoolyard Rule is reinforced by courses in subjects like history, physics, religion, and chemistry. At high school graduation, most American teenagers have a handle on the idea that if you push, you will be pushed back, and are confident that this is an iron law. When was the last time you met a schoolyard Gandhi?

But then comes college. The unfortunates who trundle off to Yale, Harvard, Columbia, and elsewhere in the Ivy League are cleansed of the Schoolyard Rule’s common sense, emerging four years later with few contact points with reality. They have learned to shape policies for the world they want, not the one on offer. They believe it their duty to use whatever tool available, be it laws, bayonets, or cruise missiles, to turn the world’s people into semi-socialist, spendthrift, ahistoric, anti-religious democrats — in short, mirror images of themselves.

These Ivy League graduates who have forgotten the Schoolyard Rule now dominate U.S. foreign policy. Eager to push hard any person or state they disagree with or dislike, they blithely assume the pushed will know such punishment is indispensable in becoming as smart, cool, and sophisticated as people like Barack Obama, Hillary Clinton, and John McCain.

This is just a weird understanding of how the American education system works. Plenty of non-interventionists graduate the Ivies and plenty of neocons and liberal interventionists go to state schools–or no college at all. Indeed, McCain didn’t go to the Ivy League; he spent four years at Annapolis and did his graduate work at the National War College.

Nearly alone among Republicans and Democrats, Paul knows that ignoring the Schoolyard Rule, its corollary, and the founders’ warning against nonessential intervention in foreigners’ affairs would be ruinous for America. As president, Paul would push only if a genuine U.S. national security interest were at stake. Wars would be fought only over life-and-death matters — like access to energy and freedom of the seas — and not over ephemera like Israel’s interests and women’s rights and human rights overseas.

Paul would listen to the enemy. Not to empathize or sympathize, but to understand his motivation and form policy to defeat him, ensuring the motivation of today’s enemies is not passed to the next generation. The failure of both Bushes, Clinton, and Obama to understand that it is U.S. government actions in the Islamic world that fire Islamist motivation, not hatred of freedom or how Americans live at home, proves that only Paul’s approach can restore U.S. security. The Islamists have educated Americans just as clearly and openly as Ho Chi Minh and General Giap did; the United States’ failure of perception has already ensured that much of the next generation of young Muslims will become Islamists.

Uh huh. It should be noted that Scheuer’s doctrine of non-interventionism isn’t a leftist pacifism. Oh, no. He thinks we need to be fighting fire with fire. In Marching Toward Hell, his 2008 follow-up to Through Our Enemies’ Eyes and Imperial Hubris, he argues,

Killing in large numbers is not enough to defeat our Muslim foes. With killing must come a Sherman-like razing of infrastructure. Roads and irrigation systems; bridges, power plants and crops in the field…Land mines, moreover will be massively reintroduced to seal borders and mountain passes…such actions will yield large civilian casualties, displaced populations, and refugee flows. Again, this sort of bloody-mindedness is neither admirable nor desirable, but it will remain America’s only option so long as she stands by her failed policies toward the Muslim world.

This, of course, is the sort of non-interventionism guaranteed to win the hearts and minds of decent Muslims everywhere. It is not, I should point out, the policy of Ron Paul–who thinks we should just mind our own damned business, withdraw from the Middle East–including Israel–completely, and become an insular country. While I think that’s absurd, it’s not batshit crazy in the way Scheuer’s policy would be.