Egyptian blogs Freedom for Egyptians and Arab Sandmonkey both report that the Danish Mohammad cartoons that have sparked so much outrage “were actually printed in the Egyptian newspaper Al Fagr back in October 2005,” during the holy month of Ramadan. 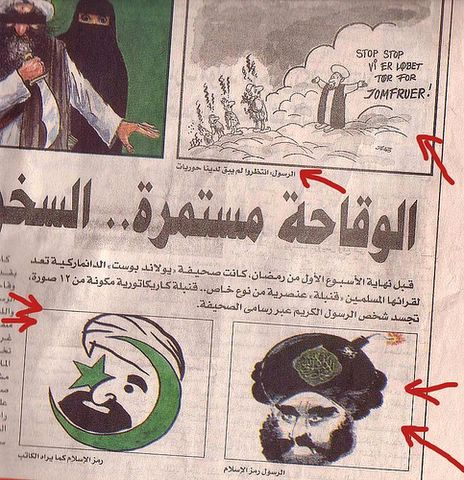 Amir Taheri notes that, despite what we have been told since the cartoon controversy erupted, that “Islam prohibits neither images of Muhammad nor jokes about religion.”

The “rage machine” was set in motion when the Muslim Brotherhood–a political, not a religious, organization–called on sympathizers in the Middle East and Europe to take the field. A fatwa was issued by Yussuf al-Qaradawi, a Brotherhood sheikh with his own program on al-Jazeera. Not to be left behind, the Brotherhood’s rivals, Hizb al-Tahrir al-Islami (Islamic Liberation Party) and the Movement of the Exiles (Ghuraba), joined the fray. Believing that there might be something in it for themselves, the Syrian Baathist leaders abandoned their party’s 60-year-old secular pretensions and organized attacks on the Danish and Norwegian embassies in Damascus and Beirut.

There is no Quranic injunction against images, whether of Muhammad or anyone else. When it spread into the Levant, Islam came into contact with a version of Christianity that was militantly iconoclastic. As a result some Muslim theologians, at a time when Islam still had an organic theology, issued “fatwas” against any depiction of the Godhead. That position was further buttressed by the fact that Islam acknowledges the Jewish Ten Commandments–which include a ban on depicting God–as part of its heritage. The issue has never been decided one way or another, and the claim that a ban on images is “an absolute principle of Islam” is purely political. Islam has only one absolute principle: the Oneness of God. Trying to invent other absolutes is, from the point of view of Islamic theology, nothing but sherk, i.e., the bestowal on the Many of the attributes of the One.

The claim that the ban on depicting Muhammad and other prophets is an absolute principle of Islam is also refuted by history. Many portraits of Muhammad have been drawn by Muslim artists, often commissioned by Muslim rulers.

Richard Fernandez says that the multiculturalists have been “Sold some phony interpretation of Islam the way you would take a rube to the Olive Garden for Italian food, Taco Bell for Mexican, or serve up chop-suey and General Tso chicken as authentic Chinese cuisine.”

The more the onion of this manufactured scandal is peeled, the more it’s apparent that the cartoons merely presented Islamists and oppressive Arab governments with an opportunity to try to embarrass the West and let the oppressed peoples (of Syria, for example) blow off some steam by redirecting their anger out away from their own regimes. Some fellow travelers in other places, such as Afghanistan, grabbed on to the caboose.

Sensing points to a very long Walid Phares essay detailing the timeline by which the reaction to the cartoons flared up.

It is reality that Muslims worldwide certainly found the drawings inherently offensive but it is also another reality that the “intermediaries” between the masses and the “crisis” were thoroughly preparing their campaign. Many voices, including in Europe today, are asserting that the Jyllands Posten and its sisters in the cartoon field wanted to make a point back in the summer: that is to affirm that freedom of speech is not selective. They went too far in view of Muslim religious sociology. But many other voices are discovering by the day, that the “party” the journalists were confronting was not the Muslim public, but political activists -the Islamists- who claim representing about fifth of humanity: Islam. The issue is about a clash between liberal secularists in the West and Islamists worldwide. It is about their world views on law, ethics, and international relations. The Islamists want to draw the limits of world freedoms and the Western liberals reject that limitation.

Quite so. The irony is that both the Islamists and the most virulent anti-Muslims have done a good job at presenting the most extreme face of Islam as its true face.

See the twelve cartoons that sparked the protests in full size at my Danish Muslim Cartoons page.

Related stories below the fold.