Today marks the one year anniversary of the capture of Saddam Hussein, who was hiding in his spider hole. 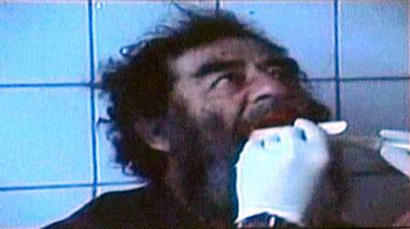 The OTB posts on the subject at the time:

And that was just the first day!

As UPI’s Claude Salhani noted that afternoon, Saddam’s capture was unlikely to spell the end of the insurgency:

In fact, Saddam’s capture may not herald the sudden end of these attacks. Instead, it may well have the opposite effect — that of seeing the remnants of the Baath resistance push for an all out, final chance assault, as a vendetta for the demise of their leader. Another scenario is that with their leader captured and humiliated in front of the world, the resistance may putter to a halt, dry up and die away. But let’s not claim total victory too soon.

The real danger in Iraq today no longer emanates from the Baathists, but comes from the thousands of jihadi resistance fighters who have been pouring into Iraq. Unlike the Baathists, they are unlikely to be affected by Saddam’s demise. The jihadi fighters are the ones who have been the most active in recent months and all indications points to them stepping up their war against the U.S. occupation of Iraq.

He was right, of course.

A year after Saddam capture, rebels fight on (MSNBC-Reuters)

Much has changed in the year since a haggard-looking Saddam Hussein was pulled from a hole in the ground and taken into custody by jubilant U.S. troops. In some ways, it has changed for the worse. President Bush hailed the capture as a breakthrough at the time, saying he expected his arch foe to be tried, convicted and put to death Ã¢€” adding that that would be up to the Iraqi courts. Ã¢€œIn the history of Iraq, a dark and painful era is over,Ã¢€ Bush declared in a television address the day after the capture Dec. 13. Ã¢€œA hopeful day has arrived. All Iraqis can now come together and reject violence and build a new Iraq.Ã¢€ But twice as many U.S. soldiers were killed by insurgents in the seven months after SaddamÃ¢€™s capture than in the seven months before, and thousands of Iraqis have died. There are growing fears that elections set for Jan. 30 could be derailed by the mayhem.

In January, Maj. Gen. Ray Odierno, commander of the ArmyÃ¢€™s 4th Infantry Division, whose troops got credit for snatching the Ã¢€œAce of Spades,Ã¢€ declared the insurgency to be Ã¢€œon its kneesÃ¢€ and only a Ã¢€œsporadic threat.Ã¢€ Ã¢€œI believe within six months, I think youÃ¢€™re going to see some normalcy,Ã¢€ he told the Pentagon news corps. The confidence was infectious. Ã¢€œSystematically we have captured or killed the individuals directing the insurgency,Ã¢€ said Maj. Gen. Charles Swannack, commander of the 82nd Airborne, in March. Ã¢€œ… The insurgency is pretty much in disarray, I think is the best way to describe it.Ã¢€ Swannack was responsible for the volatile western region of Iraq, including the cities of Fallujah and Ramadi. A month after he spoke, Fallujah fell into guerrilla hands and was wrested back only after a U.S. offensive last month.

Presumably, the effort to build a secure Iraq would be even further behind were Saddam still free. But that the level of violence would be higher a year later was not something I would have predicted. Nor would I have guessed that Saddam’s trial wouldn’t even be underway. I’m still glad “We got him” but it has mattered less than it seemed at the time.