Progress in Saudi Arabia, but there's still a long way for this backward, discriminatory society to go. 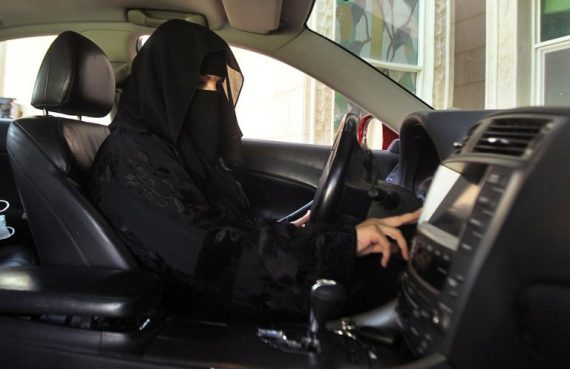 In what many are hailing as a major concession by a nation that has long restricted the rights of women, the King of Saudi Arabia announced that women would be allowed to drive beginning next year:

Saudi Arabia announced on Tuesday that it would allow women to drive, ending a longstanding policy that has become a global symbol of the oppression of women in the ultraconservative kingdom.

The change, which will take effect in June 2018, was announced in a royal decree read live on state television and in a simultaneous media event in Washington. The decision highlights the damage that the ban on women driving has done to the kingdom’s international reputation and its hopes for a public relations benefit from the reform.

Saudi leaders also hope the new policy will help the economy by increasing women’s participation in the workplace. Many working Saudi women spend much of their salaries on drivers or must be driven to work by male relatives.

“It is amazing,” said Fawziah al-Bakr, a Saudi university professor who was among 47 women who participated in the kingdom’s first protest against the ban — in 1990. After driving around the Saudi capital, Riyadh, the women were arrested and some lost their jobs.

“Since that day, Saudi women have been asking for the right to drive, and finally it arrived,” she said by phone. “We have been waiting for a very long time.”

Saudi Arabia, home to Islam’s holiest sites, is an absolute monarchy ruled according to Shariah law. Saudi officials and clerics have provided numerous explanations for the ban over the years.

Some said that it was inappropriate in Saudi culture for women to drive, or that male drivers would not know how to handle having women in cars next to them. Others argued that allowing women to drive would lead to promiscuity and the collapse of the Saudi family. One cleric claimed — with no evidence — that driving harmed women’s ovaries.

Rights groups and Saudi activists have long campaigned for the ban to be overturned, and some women have been arrested and jailed for defying the prohibition and taking the wheel.

In 2014, Loujain Hathloul was arrested after trying to cross the border from the United Arab Emirates into Saudi Arabia and detained for 73 days.

“@LoujainHathloul I’m so proud of you,” Fahad Albuteiri, her husband and a well-known Saudi comedian, wrote on Twitter.

The ban has long marred the image of Saudi Arabia, even among its closest allies, like the United States, whose officials sometimes chafed at a policy shared only by the jihadists of the Islamic State and the Taliban.

The decision won near universal praise in Washington. Heather Nauert, the State Department’s spokeswoman, called it “a great step in the right direction for that country.”

The momentum to change the policy picked up in recent years with the rise of Crown Prince Mohammed bin Salman, the king’s 32-year-old son, who has laid out a far-reaching plan to overhaul the kingdom’s economy and society.

Increasing numbers of women are working in a growing number of professions, and in 2015, women were allowed to vote and to run for seats on the kingdom’s local councils.

Ending the ban on women driving is expected to face some resistance inside the kingdom, where families are highly patriarchal and some men say they worry about their female relatives getting stranded should their cars break down.

But in a small news conference at the Saudi embassy in Washington, an exuberant Prince Khalid bin Salman, the Saudi ambassador, said women would be able to obtain driver’s licenses without having to ask permission of their husbands, fathers or any male guardian — despite so-called “guardianship” laws that give men power over their female relatives.

Under these laws, women cannot travel abroad, work or undergo some medical procedures without the consent of their male “guardian,” often a father, a husband or even a son. While the enforcement of guardianship laws has loosened in recent years, there is little to stop Saudi men from greatly limiting the movements of their wives or daughters.

The ambassador, who is a son of the king, said that women would be able to drive alone but that the Interior Ministry would decide whether they could work as professional drivers.

He said he did not expect the change in policy to face significant resistance.

“I think our society is ready,” he said.

While this is a good step forward by a nation where women have long been treated as second-class citizens, it hardly solves the many problems with policy and culture in Saudi Arabia, especially when it comes to the treatment of women. In The New Yorker, for example, Robin Wright emphasizes this point and says that much more progress is necessary before Saudis can be forgiven for their treatment of more than half their population:

The ban has long been a barometer of the oil-rich but ultra-conservative kingdom’s human-rights abuses, constantly referenced in the State Department’s annual Human Rights Report. The shift, on Tuesday, was sufficiently striking that the Times sent out a breaking-news e-mail about the king’s decree.

There are, however, caveats. The ruling will not go into effect until June, 2018. Women may have to get the permission of their male “guardians” to drive, as they do for many major activities in their life. The biggest issue may be winning the approval of Saudi Arabia’s Wahhabi clerics, the most conservative of the Islamic faith. The decree stipulated that new regulations must “apply and adhere to the necessary Sharia standards,” a reference to Islamic law. What that means was left unanswered.

In the past, Saudi clerics have opposed allowing women to get behind the wheel. Just last week, Sheikh Saad al-Hijri decreed that women “don’t deserve to drive because they only have a quarter of a brain.” The sheikh is the powerful head of fatwas in Asir governorate, in the country’s mountainous southwest. His lecture focused on the “evils of women driving.” He also said that women have a quarter of a brain when they go shopping. One of the kingdom’s most famous clerics, the former grand mufti Sheikh Abdul Aziz ibn Baz, once declared, “Driving by women contradicts Islamic traditions followed by Saudi Citizens.” (He was also the cleric who questioned the U.S. moon landing because, he ruled, the Earth is flat.)

The new decree established a government body to draw up guidelines for implementing the rule—leaving open the question of what guidelines might be necessary for women that are not also applied to men. “What we’ve seen in the past is more limited proposals: that women can drive if they are going to work, or if they’re going to the supermarket, but no joyriding,” Coogle said. “Other proposals suggested that there would be a curfew for women drivers. We hope this will not be a discriminatory system with different rules for women—and that’s a possibility, given the way the rules have happened in the past.”

Juan Cole, meanwhile, notes the many factors that are prompting liberalization such as this from the typically conservative Saudi leadership:

Saudi Arabia, like some other petrodollar states of the global South, has undergone incredible changes in the past 50 years. In 1970, only 2% of Saudi women could read and write.

Today, 87% of the Saudi adult population is literate.

Slightly over half of university students, 52%, are women. Most campuses, however, are gender segregated. This situation causes difficulties for women, since although there are a few all-female law or medical schools,they can hardly meet the demand for women’s professional training.

About 60,000 Saudi students are studying in the US, and about half of them are women.

As was true in many places during the twentieth century in the global South, many policies toward women’s liberation were actually enacted for the convenience of men. Saudi rulers let women become so prominent as university students in order to make them suitable brides for the increasing numbers of highly educated Saudi men. The powers that be feared that Saudi men would increasingly take European or North American wives if Saudi women remained uneducated and so unable to carry a conversation with their male peers.

What this means, of course, is that the devil is in the details and that the world ought to pause before rushing to applaud the Saudi government for a decision that should have been made years ago. This is especially true given the fact that, as Wright points out, previous expansions of rights to women have placed significant restrictions on them that do not apply to men and included provisions that effectively provide significant discretion to the men in a woman’s family to control her behavior regardless of what the law may or may not permit. Additionally, while the ability to drive alone is important even if it’s only allowed under limited circumstances, it hardly does anything to address the other parts of Saudi law and culture that allow women to be treated as essentially the property of their fathers, their husbands, or other male members of their family. Unless and until that changes, there’s no way that it can be said that Saudi Arabia is a respectable nation when it comes to recognizing the rights of women.

All that being said, this is a positive step forward that hopefully is a sign that things may actually be starting to change in a nation that has long been bound by traditionalist views that have restricted human rights not only of women, but of gays and lesbians, non-Muslims, and political dissidents. So far, there are no signs of the rules governing those groups being loosened anytime soon, but the fact there has been some movement at all suggests that slowly but surely the Kingdom is moving in the right direction. In part at least, it appears that the leadership of the Kingdom is recognizing that change is going to come in any case and that it may be advisable for them to introduce such changes slowly rather than risk the kind of social revolts that have rocked other traditional Arabic nations in recent years.  Whether they succeed in resisting those winds of change before they overtake the Kingdom remains to be seen.