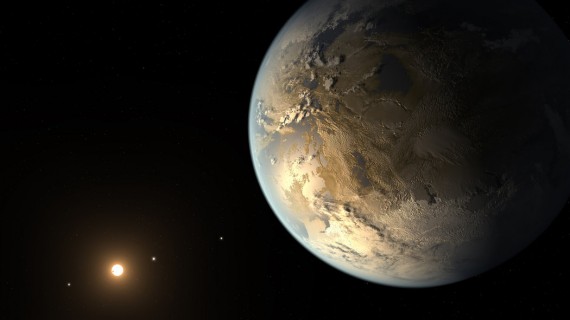 NASA scientists have discovered the first earth-sized planet outside the Solar System that may also be habitable:

It is a bit bigger and somewhat colder, but a planet circling a star 500 light-years away is otherwise the closest match of our home world discovered so far, astronomers announced on Thursday.

The planet, known as Kepler 186f, named after NASA’s Kepler planet-finding mission, which found it, has a diameter of 8,700 miles, 10 percent wider than Earth, and its orbit lies within the “Goldilocks zone” of its star, Kepler 186 — not too hot, not too cold, where temperatures could allow for liquid water to flow at the surface, making it potentially hospitable for life.

“Kepler 186f is the first, validated, Earth-size planet in the habitable zone of another star,” said Elisa V. Quintana of the SETI Institute and NASA’s Ames Research Center in Mountain View, Calif., at a news conference on Thursday. “It has the right size and is at the right distance to have properties similar to our home planet.”

Alex Knapp has more detail on the findings:

The star Kepler 186 is a “red dwarf” star, about half the size and mass of our own Sun. It’s about 500 light years away from Earth, near the constellation Cygnus in the night sky. The planet itself orbits its sun once every 130 days.

If life does exist there, it exists in a rather darker place than Earth. It only gets about one-third of the energy from its star that the Earth gets, and at high noon it’s only about as bright as the Earth is at sunset. Which might pose some interesting questions as to whether plant life could have arisen in the same way as Earth.

“Being in the habitable zone does not mean we know this planet is habitable. The temperature on the planet is strongly dependent on what kind of atmosphere the planet has,” said researcher Thomas Barclay in a press release. “Kepler-186f can be thought of as an Earth-cousin rather than an Earth-twin. It has many properties that resemble Earth.”

While this planet may not be a good candidate for life outside the Solar System itself, its discovery is significant because it brings us one step closer to discovering planets even more similar to Earth within the habitable zone of neighboring star systems. In a very short period of time, we’ve gone from not being sure there are any planets out there at all, to discovering that they are perhaps even more abundant than we might have dreamed, to now finding planets similar to Earth. Finding evidence that there is life on any of these planets, of course, will be a far more difficult exercise. However, with the evidence mounting that planets are in fact quite common in the universe, specifically including planets within the zone that would allow life of some kind to develop, we’re approaching the point where it will be incredibly naive to believe that we are alone in the universe.

Artists conception of Kepler 186 via The New York Times