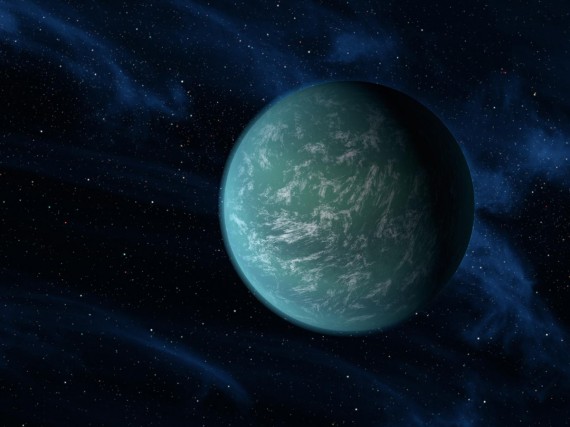 The Kepler Space Telescope has been searching for planets outside our Solar System for some time now, but it hasn’t found a planet that could be habitable until now:

The search for Earth-like planets circling other stars is heating up, but the latest discovery is not too hot at all. It’s not too cold, either. Instead, the temperature on the newly announced planet Kepler-22b could be just right for life — about 72 degrees, a perfect spring day on Earth.

“If it has a surface, it ought to have a nice temperature,” said Kepler’s lead scientist, Bill Borucki, during a teleconference Monday.

“It’s right in the middle of the habitable zone,” said Natalie Batahla, a Kepler scientist, referring to the narrow, balmy band of space around any star where water can be liquid. “The other exciting thing is that it orbits a star very, very similar to our own sun.”

The actual temperature on Kepler-22b hinges on whether the planet has an atmosphere, which, like a blanket, would warm the surface. Even without an atmosphere, Borucki said, the planet would likely be warm enough to host liquid water on its surface.

If it has a surface.

At 2.4 times wider than Earth, the composition of Kepler-22b is a puzzle. It could be rocky, a “super-Earth” much like our planet but bigger. It might also be a water world covered with deep oceans, said Dimitar Sasselov, a Kepler scientist at the Harvard-Smithsonian Center for Astrophysics. Or it could be gaseous like Neptune or Uranus.

Determining the planet’s composition rests in part on measuring its mass — how heavy it is. The Kepler telescope is unable to make this measurement, but ground-based telescopes can by watching the planet tugging on its star. Telescopes in Hawaii and elsewhere will attempt these measurements when the star comes into view next summer, Borucki said.

Besides its balmy temperature, Kepler-22b shares other intriguing similarities with Earth. The planet’s home star, some 600 light years distant and near the constellation Cygnus, is “almost a solar twin,” Batahla said. That means the light hitting the planet’s surface would be almost the same color as the light hitting Earth. And Kepler-22b’s year is almost the same length as an Earth year: 290 days instead of 365.

Aside from Kepler 22-b, the Kepler mission has been pretty successful at tracking down evidence of planetary objects:

The announcement of Kepler-22b has amped up excitement among scientists searching for Earth-like planets orbiting sunlike stars, the goal of the $600 million Kepler mission, which launched into Earth orbit in 2009. This week, Kepler scientists are meeting at NASA’s Ames Research Center in California to review the mission’s successes.

They are legion. By staring at 150,000 stars, Kepler has found 2,326 “candidate planets.” Most are huge gas giants like Jupiter. But 207 of the candidates would be similar in size to Earth. Of those, 10 hold special interest — like Kepler-22b, they orbit their stars in the habitable zone. Follow-up observations are underway to determine whether these 10 candidates are true planets or false signals.

Said Batahla: “We are getting really close, we are really homing in on the true Earth-sized habitable planets.”

The more planets like this we find, the less likely the “we are alone” hypothesis would seem to be. Confirming the existence of life hundreds or thousands of light years away won’t be easy, and may not even be possible unless we detect radio signals indicating intelligence, but once you start finding planets that possess the conditions that make life possible it’s not that far a leap to the conclusion that some form of life must exist there.

Artists conception of Kepler 22-b via NASA