Agents of the U.S. Secret Service that were sent to Colombia in connection with of President Obama’s trip there for the Summit Of The Americas have been sent home amid allegations of involvement in a prostitution scandal:

The U.S. Secret Service is investigating allegations of misconduct by agents who had been sent to Cartagena, Colombia, to provide security for President Obama’s trip to a summit that began there Friday.

Edwin Donovan, an agency spokesman, said that an unspecified number of agents have been recalled and replaced with others, stressing that Obama’s security has not been compromised because of the change. Obama arrived in Cartagena on Friday afternoon for this weekend’s Summit of the Americas, a gathering of 33 of the hemisphere’s 35 leaders to discuss economic policy and trade.

Donovan declined to disclose details about the nature of the alleged misconduct. But Jon Adler, president of the Federal Law Enforcement Officers Association, said the accusations relate to at least one agent having involvement with prostitutes in Cartagena.

In a statement, Donovan said the matter has been turned over to the agency’s Office of Professional Responsibility, which serves as the agency’s internal affairs unit.

“The Secret Service takes all allegations of misconduct seriously,” Donovan said. “These personnel changes will not affect the comprehensive security plan that has been prepared in advance of the President’s trip.”

Adler said the entire unit was recalled for purposes of the investigation. The Secret Service “responded appropriately” and is “looking at a very serious allegation,” he said, adding that the agency “needs to properly investigate and fairly ascertain the merits of the allegations.”

The Washington Post was alerted to the investigation by Ronald Kessler, a former Post reporter and author of several nonfiction books, including the book “In the President’s Secret Service: Behind the Scenes With Agents in the Line of Fire and the Presidents They Protect.”

Kessler said he was told that a dozen agents had been removed from the trip. He added that soliciting prostitution is considered inappropriate by the Secret Service, even though it is legal in Colombia when conducted in designated “tolerance zones.” However, Kessler added, several of the agents involved are married.

This seems unusual for an agency like the Secret Service, which has long prided itself over the years on its professionalism, especially in the Presidential Protective Detail divisions. The Washington Post story linked above, though, does recall two incidents over the past three years that I’d forgotten about. In one, an agent in Hawaii as part of an advance team for the last year’s Asia Pacific Summit was charged with 2nd Degree Murder in connection with an off-duty shooting. In another an agent was charged with drunk driving while off-duty in Iowa.

Nonetheless, this is an embarrassment. And no doubt those married agents face some difficult conversations when they get home. 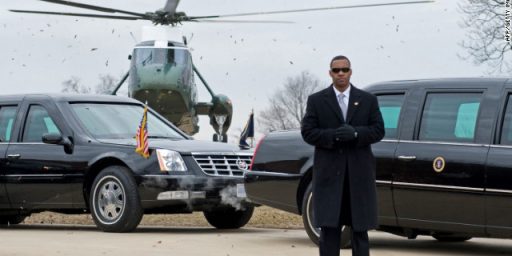