In a surprise move, General Eric Shinseki has been tapped as Barack Obama’s Secretary of Veterans Affairs. Shinseki, a four-star general and 38-year veteran who retired shortly after the fall of Baghdad in 2003, will appear with Obama in Chicago at a news conference today commemorating the 67th anniversary of the Japanese attacks on Pearl Harbor. Obama said Shinseki agreed to join the incoming administration because “both he and I share a reverence for those who serve.”

“When I reflect on the sacrifices that have been made by our veterans and I think about how so many veterans around the country are struggling even more than those who have not served — higher unemployment rates, higher homeless rates, higher substance-abuse rates, medical care that is inadequate — it breaks my heart, and I think that General Shinseki is exactly the right person who is going to be able to make sure that we honor our troops when they come home,” Obama told NBC News’ Tom Brokaw in a interview taped for broadcast today on “Meet the Press.”

Notably, Shinseki led the Army at the same time that Gen. James L. Jones, Obama’s pick for national security adviser, commanded the Marines. Both questioned Wolfowitz’s presumptions, before the war in Iraq commenced, about how the fighting would go, and they argued that the Pentagon was being too optimistic in its planning and should prepare thoroughly for worst-case scenarios.

Retired Army Gen. Colin L. Powell, who was President Bush’s secretary of state at the time of the Iraq invasion, called Shinseki “a superb choice. . . . He is a wounded hero who survived and worked his way to the top. He knows soldiers and knows what it takes to keep faith with the men and women who went forth to serve the nation. He also knows how to run large and complex bureaucratic institutions. His is an inspired selection.” Powell, also a former chairman of the Joint Chiefs of Staff, supported Obama’s election. Shinseki, 66, was twice awarded a Purple Heart for injuries sustained in Vietnam.

A truly inspired choice.   While Max Cleland had been talked about for a second stint in the job and Tammy Duckworth was bandied about as a more unconventional choice, Shinseki will bring enormous clout to the post.  Presumably, too, he wouldn’t have taken the gig without assurances that he’d be able to make a difference.

James Fallows notes that Shinseki’s quiet service continued into retirement: “Shinseki, who could have had a lucrative career on the talk show/lecture circuit giving ‘I told you so’ presentations, has not indulged that taste at all.” 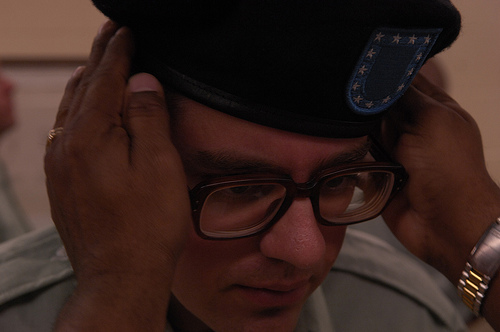