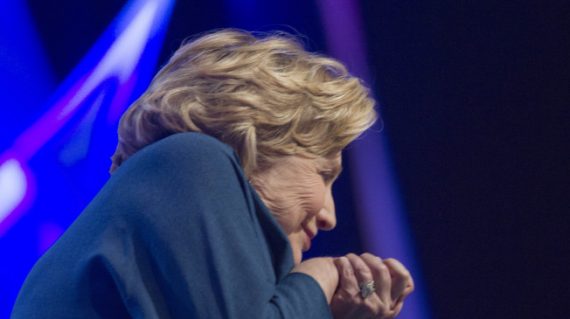 On Thursday, Hillary Clinton was giving a speech in Las Vegas before an waste management industry trade group convention when a woman ran to the front of the room and threw a shoe at her:

(CNN) – A woman hurled a shoe at Hillary Clinton on Thursday during a speech in Las Vegas, according to the Secret Service.

She ducked and it missed her, joking afterward about the incident that occurred during an appearance before a recycling trade group.

“My goodness, I didn’t know solid waste management was so controversial,” she quipped.

“Thank goodness she didn’t play softball like I did,” she added.

The Secret Service took the woman into custody. They said she was not a ticketed guest and slipped past hotel security.

She was not named and only identified as a protester. But it was not clear what she was protesting.

Not surprisingly, it turns out that the woman involved appears to be mentally unbalanced and had become known in Denver for her bizarre attempts to interject herself into the trial of Aurora shooter James Holmes.

As far as some on the right are concerned, though, the whole thing smells like a conspiracy:

Some conservative media figures are openly wondering if Hillary Clinton staged an incidentduring a speech in Las Vegas on Thursday in which a woman in the audience threw a shoe at her. The shoe appeared to miss the rumored 2016 presidential hopeful, who ducked and made light of it, while the reported thrower, Alison Michelle Ernst, was booked by the authorities.

A blog post published Monday at the website of Fox News commentator Bernard Goldberg speculated that Clinton probably “calculated it beforehand,” as is “almost always true” with things that happen to her.

“So it would not be stretching logic to suppose that Hillary arranged to have the shoe thrown at her,” wrote Arthur Louis at Goldberg’s site. “Remembering the Bush incident [when an Iraqi journalist threw two shoes at President George W. Bush], she may have calculated that this would make her seem presidential. This would explain why Ms. Ernst was not pounded to a pulp by Hillary’s bodyguards, and why she seems on the verge of getting off scot free. Don’t be too surprised, the next time you visit Phoenix, if you see her sitting at a table in a downtown Hillary for President store front, stuffing and sealing envelopes.”

And Rush Limbaugh suggested the incident was staged as well:

Rush Limbaugh suspects that former Secretary of State Hillary Clinton’s near-miss of a thrown shoe at an event last week could have been staged, he said on his show Monday.

While Limbaugh said on his radio show Monday that he hadn’t seen it and was thus “ill-equipped” to discuss the incident, which occurred during a speech in Las Vegas last week, he still suspected the whole thing wasn’t as it seemed.

“I’ve got people telling me her reaction wasn’t natural,” Limbaugh said. “I haven’t cared enough to go try to find it. I really haven’t. Somebody threw a shoe at Hillary. Big whoop. Maybe it’s because in my subconscious I think it was staged or set up or whatever. Look, folks, I know these people so well that I do not attach much genuineness to them at all.”

There will be, no doubt, some segment of the audiences that people like Limbaugh and Goldberg attract who will believe these claims to be true just as they believe everything else they say to be true. The fact that they’re peddling an utterly ridiculous conspiracy theory is apparently beyond the comprehension of these people.