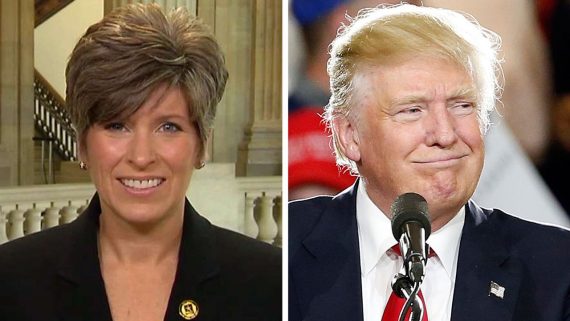 Donald Trump continued to work his way through consideration of Vice-Presidential running mates yesterday as he met with Joni Ernst, junior Senator from Iowa who served a career in the military before entering politics and was swept into office by the GOP Senate tidal wave of 2014:

Donald J. Trump met in New Jersey on Monday with Senator Joni Ernst, Republican of Iowa, as he screens potential running mates in a series of meetings.

One person briefed on the process, who was not authorized to speak publicly, said that the campaign began vetting Ms. Ernst in recent days as a possible vice-presidential pick. But it is not clear how seriously Ms. Ernst is being considered for a position that Mr. Trump has kept close counsel about filling.

Jason Miller, a senior communications adviser for Mr. Trump, declined to comment. In a statement on Monday, Ms. Ernst confirmed that she had met with Mr. Trump.

Ms. Ernst is a retired National Guard lieutenant colonel and a veteran of the Iraq war. Her military background could help Mr. Trump given his lack of foreign policy experience or national security experience. The fact that she is a woman could also help Mr. Trump with a group of voters with whom he currently polls poorly.

Ms. Ernst is also considered a possible keynote speaker at the Republican National Convention, which begins on July 18 in Cleveland.

In the statement, Ms. Ernst said that her focus was on defeating Hillary Clinton, saying, “I had a good conversation with Donald Trump today, and we discussed what I am hearing from Iowans as I travel around the state on my 99-county tour, and the best path forward for our country.”

She added: “I will continue to share my insights with Donald about the need to strengthen our economy, keep our nation safe and ensure America is always a strong, stabilizing force around the globe.”

According to a source briefed on the meeting, both Paul Manafort, Mr. Trump’s chief strategist who is handling much of the vice presidential search, and Reince Priebus, the Republican National Committee chairman, also attended.

It is unusual in recent history for a presumptive nominee of a major party to tease out the process for choosing a running mate in such a public way, but it is in reflective of Mr. Trump’s approach on his reality TV show, “The Apprentice.”

Earlier in the weekend, Mr. Trump met with Gov. Mike Pence of Indiana, another potential vice-presidential candidate. The two met at Trump National Golf Club in Bedminster, N.J., where Mr. Trump is expected to meet with Ms. Ernst.

Along with Newt Gingrich, Chris Christie, and Indiana Governor Mike Pence, Ernst is the fourth name to be leaked by the campaign in the past week as one of the candidates being considered by the campaign as potential running mates. Like Pence, Ernst appears to be a last-minute addition to the campaign’s short list, with other names that have been named recently as possibilities including second term Senator Bob Corker of Tennessee, who previously met with Trump in New York City and will be joining him at a campaign rally in North Carolina today, and first term Senator Tom Cotton of Arkansas, whose name is similarly a recent addition to a short list that, at first, seemed as though had been narrowed down to Gingrich and Christie. Whether this means that Trump has moved beyond Gingrich and Christie or that the list had not been as whittled down as reports indicate is unclear. One analyst on Morning Joe this morning suggested that this stretch of meetings was addressed as much to Republican leaders who have expressed doubts about this campaign as anyone else and was largely meant to reassure them that Trump was serious about the campaign and approaching the selection of a running mate in a serious manner.

As far as we know, Ernst is the only woman potentially being considered by Trump for the running mate slot, which is actually somewhat surprising given the fact that polling has shown that Trump has real problems among female voters that having a woman on the ticket could help address. Part of the problem that Trump faces in that regard is that two of the most prominent women in the Republican Party today, South Carolina Governor Nikki Haley and New Mexico Governor Susanna Martinez, have both essentially taken themselves out of contention for the running mate’s slot. Ernst, meanwhile, is still relatively unknown outside of Iowa, and it’s unclear exactly what she would bring to the ticket herself. Ernst does have military experience, which the other candidates except Cotton lack, but I’m not sure that’s enough to vault her to the top of the list. Additionally, the fact that she’s only been in Washington for two years tends to work against Trump’s previously stated desire to having a running mate who could help him navigate the halls of Congress and gain access to Members of the House and Senate on both sides of the aisle who might be skeptical of Trump as a leader. In the past, we’ve seen Vice-Presidential selection processes where certain names were thrown out as a diversion for the media and the public in order to build up anticipation prior to the actual announcements, and that’s what candidates like Pence and Ernst may turn out to be. In any case, with two weeks to go before the convention it won’t be long before we know who Trump has selected.