SOCOM Chief’s Rise Not Swift At All

And odd report from Washington Post and Stars and Stripes. 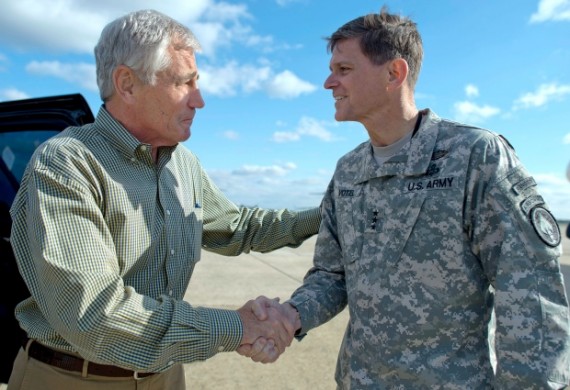 Shortly after a controversial Dec. 11 drone strike in Yemen, Lt. Gen. Joseph Votel began pressing for the United States to push back on accusations that it had killed numerous civilians in a wedding party in the process. He believed the criticism was unwarranted and didn’t want al-Qaida in the Arabian Peninsula to use the narrative to score a propaganda victory, even though human rights advocates concluded that civilians had indeed died.

Those details, reported in the Wall Street Journal in May, are among the only recent public characterizations of Votel. The Army Ranger has led the military’s secretive Joint Special Operations Command since June 2011, overseeing the military’s most highly classified missions and well trained units. They include the Army’s 1st Special Forces Operational Detachment-Delta, commonly known as Delta Force, the Naval Special Warfare Development Group, often called SEAL Team Six, and the Air Force’s 24th Special Tactics Squadron, which frequently deploys with them.

Defense Secretary Chuck Hagel announced Tuesday that Votel is President Barack Obama’s pick to serve as the next commander of U.S. Special Operations Command, the powerful four-star command that oversees U.S. Special Operations forces across the globe. The decision requires Senate confirmation, but it’s hardly a surprise. Rather, it continues a swift, quiet ascent by Votel through the most elite forces in the military.

Judging from the photo, Votel is very young for a four-star general. He’s better preserved than I am, that’s for sure.

But, it turns out, Votel is a 1980 graduate of West Point, meaning he has 34 years of commissioned service. That’s . . . about the time you’d expect someone who’s going to pin on a fourth star to do so.

Ray Odierno, the Army Chief of Staff, graduated West Point in 1976, four years of Votel. He made four star in 2008, six years ahead of Votel.

You want fast? How about Janet Wolfenbarger, the Air Force’s first female four star. She graduated the Air Force Academy in 1980, the year Votel graduated West Point. She pinned on two years ago.

None of this is to disparage Votel, of course. Making general officer at all, much less four stars, is an impressive achievement, indeed. And doing it in the special operations community is more impressive still. It’s just a strange framing of his story to suggest that he was a particularly fast riser.

If the argument is that he came out of nowhere, being CG of JSOC is a rather high profile post. McRaven, Stanley McChrystal, Dave Brown, and Peter Schoomaker have gone on to four stars from the post.

Nor is making four-star after only three years as a three-star particularly unusual. Promotion in the general officer ranks is political and can be quite rapid, indeed. Dempsey, Odierno, and Wolfenbarger also did it in three years. I can’t find McRaven’s promotion history offhand, but suspect it was similarly fast.