Under Nelson Mandela's leadership, the country made a smooth transition from apartheid. Now it's going the way of Zimbabwe. 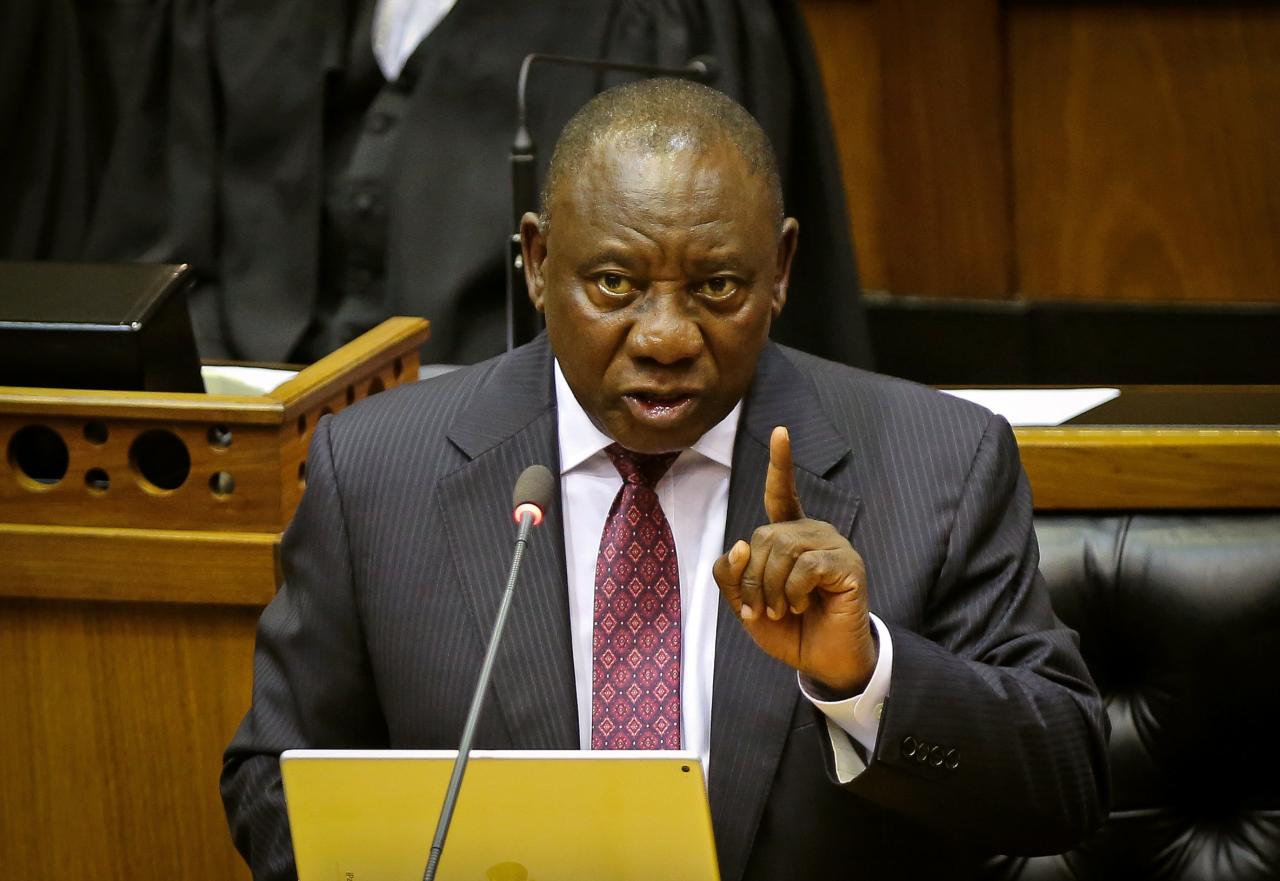 Once upon a time, South Africa received considerable attention in the American news media. The injustice of the apartheid regime and an American boycott movement received steady coverage in the 1980s and early 1990s. Nelson Mandela’s plight as a political prisoner and courage as the leader of post-apartheid transition made him an icon. But post-Mandela South Africa is slowly spiraling into another Zimbabwe.

The New Zealand Herald (“‘The time for reconciliation is over’: South Africa votes to confiscate white-owned land“):

South Africa’s parliament has voted in favour of a motion that will begin the process of amending the country’s Constitution to allow for the confiscation of white-owned land without compensation.

The motion was brought by Julius Malema, leader of the radical Marxist opposition party the Economic Freedom Fighters, and passed overwhelmingly by 241 votes to 83 against. The only parties who did not support the motion were the Democratic Alliance, Freedom Front Plus, Cope and the African Christian Democratic Party.

It was amended but supported by the ruling African National Congress and new president Cyril Ramaphosa, who made land expropriation a key pillar of his policy platform after taking over from ousted PM Jacob Zuma earlier this month.

“The time for reconciliation is over. Now is the time for justice,” Malema was quoted by News24 as telling parliament. “We must ensure that we restore the dignity of our people without compensating the criminals who stole our land.”

According to Bloomberg, a 2017 government audit found white people owned 72 per cent of farmland in South Africa.

ANC deputy chief whip Dorries Eunice Dlakude said the party “recognises that the current policy instruments, including the willing-buyer willing-seller policy and other provisions of Section 25 of the Constitution may be hindering effective land reform”.

Thandeka Mbabama from the Democatic Alliance party, which opposed the motion, said there was a need to right the wrongs of the past but expropriation “cannot be part of the solution”.

“By arguing for expropriation without compensation, the ANC has been gifted the perfect scapegoat to explain away its own failure,” she said in a statement.

“Making this argument lets the ANC off the hook on the real impediments — corruption, bad policy and chronic underfunding. Expropriation without compensation would severely undermine the national economy, only hurting poor black people even further.”

Pieter Groenewald, leader of the Freedom Front Plus party representing the white Afrikaner minority, asked what would happen to the land once it was expropriated.

“If you continue on this course, I can assure you there is going to be unforeseen consequences that is not in the interest of South Africa,” he said.

Cope leader Mosiuoa Lekota said there was a “danger that those who think equality in our lifetime equates that we must dominate whites”, News24 reported.

Malema has been leading calls for land confiscation, forcing the ANC to follow suit out of fear of losing the support of poorer black voters. In 2016, he told supporters he was “not calling for the slaughter of white people’ at least for now”.

That’s mighty white of him.*

South Africa took a step on Tuesday to hasten the transfer of land from white to black owners when parliament backed a motion seeking to change the constitution to allow land expropriation without compensation.

The ruling African National Congress has long promised reforms to redress racial disparities in land ownership and the subject remains highly emotive more than two decades after the end of apartheid. Whites still own most of South Africa’s land following centuries of brutal colonial dispossession.

Tuesday’s motion was brought by the radical left Economic Freedom Fighters (EFF) party but was supported by the ANC, which controls almost two-thirds of the parliament compared with EFF’s 6 percent.

South African President Cyril Ramaphosa said after his inauguration two weeks ago that he would speed up the transfer of land to black people although he stressed that food production and security must be preserved.

Launching a debate on the motion in parliament, EFF leader Julius Malema said”it was time for justice” on the land issue.

“We must ensure that we restore the dignity of our people without compensating the criminals who stole our land,” he said.

The motion was passed by 241 votes in favor versus 83 votes against. Parliament then instructed a committee to review the constitution and report back to it by Aug. 30.

It was not clear when any change to Section 25 of the constitution to allow expropriation of land without compensation would take place. Together, the ANC, EFF and other small opposition parties could muster the two-thirds majority needed for a constitutional change.

Something called the Zambian Observer has a more amusing take (“Take Me To Wakanda! South Africa Parliament Votes To Confiscate White-Owned Land Without Compensation“):

could South Africa be a real-life Wakanda?

South Africa is the middle of serious change. Earlier this month, President Jacob Zuma resigned from office after nearly nine years, ending a standoff with leaders in his own African National Congress party. A wealthy business man and close friend of Nelson Mandela, Cyril Ramaphosa is the new president.

Now, another change in South Africa — the South Africa parliament voted to confiscate White-owned landed with no compensation. News.com.au reports the vote will amend the country’s Constitution. “The motion was brought by Julius Malema, leader of the radical Marxist opposition party the Economic Freedom Fighters, and passed overwhelmingly by 241 votes to 83 against. The only parties who did not support the motion were the Democratic Alliance, Freedom Front Plus, Cope and the African Christian Democratic Party.” Malema said, “The time for reconciliation is over. Now is the time for justice. We must ensure that we restore the dignity of our people without compensating the criminals who stole our land.”

President Cyril Ramaphosa supports the amendment, saying, “We must see the process as accelerated land distribution, as an opportunity, rather as a threat. I’d like to invite all South Africans not to see this issue — this pain that many of our people our still going through — we should never see it as threat, we should rather see it as a great opportunity.”

Dave Schuler, from whom I got the pointer to the story, observes,

When I read this article I could only think of how nasty this could get. The white to black ratio in the population of Zimbabwe was never more than 1:20. In South Africa it’s more like 1:9. Also, the Afrikaners are very tough people and they arrived in South Africa at just about the same time as the Bantu-speaking people who make up 90% of blacks. Unless you think that blacks have some sort of inherent right to African land, a notion with troublesome implications, the Afrikaners have as much right to the land as the Bantu-speaking people do.

I agree with the sentiment, with a caveat. It’s absolutely true that South Africa is a unique case, in that whites have been there for centuries and the ancestors of present-day blacks living there came as migrants. The notion that the forebears of today’s white South Africans “stole the land” from the forebears of today’s black South Africans is mostly untrue. But, of course, the long history of apartheid was such that generations of blacks had little opportunity to become landowners. And that means, a generation after the end of apartheid, they’re still on the outside looking in despite being the overwhelming majority of the citizenry.

As a white man, I’m uncomfortable even trying to weigh the moral differences in the American and South African treatment of blacks. Slavery existed in both places, but started earlier and ended later here. Jim Crow was arguably less severe than apartheid but it lasted much longer; it also ended thirty years earlier.

We’ve been struggling for half a century to figure out how to mitigate the legacy of slavery and Jim Crow without much success. Various social welfare, educational, and affirmative action programs have helped but the progress has been quite slow. And there are still intelligent voices arguing that we need more radical solutions, including the payment of reparations.

But American blacks have always been a distinct minority. They were never more than 19 percent of the population, and that was in the very earliest days of the slave trade. In my lifetime—which coincides with the post-Jim Crow era—they have fluctuated between 10 and 14 percent. And they’re now not even the largest minority, having been overtaken by Hispanics. They’ve had little choice but to be relatively patient.

South African blacks, by contrast, are the overwhelming majority—much more so even than whites are here. The stark de jure repression there is much fresher. And their transition was accomplished as much by violent conflict as moral suasion. One at least understands why their patience has worn thin.

Still, Mandela succeeded where so many transitional leaders did not partly because he understood that the ideal outcome was a society that integrated the former oppressors. Like it or not, the whites had most of the money, technical training, and other assets necessary to remain a modern society. While that’s surely less true now than it was a quarter-century ago, neighboring Zimbabwe provides a cautionary tale against massive confiscation.

Indeed, there are already signs of a mass white exodus, with multiple petitions to grant expedited exile rights in the US and Europe:

Almost 12,000 people have signed a petition asking Donald Trump to allow white South African farmers to emigrate to the US after the country’s parliament passed a motion to explore amending the constitution to allow expropriation of land without compensation.

Following the vote, an online petition was started calling on President Trump to “initiate an emergency immigration plan allowing white Boers to come to the United States.”

The petition, which has been signed by 11,800 people, suggests that Trump should stop letting refugees from Somalia and countries in the Middle East enter the country, as they “cannot be properly vetted”, and should allow South Africans in instead.

“[They] can easily be vetted and also possess skills that make them compatible with our culture and civilization,” the petition states.

A similar petition, with over 17,000 signatures, is calling on Theresa May, Jean-Claude Juncker and Angela Merkel to “allow all white South Africans the right to return to Europe.”

There’s an irony in the latter in that, as with so many calls over centuries for blacks to “return” to Africa, most white South Africans have always been South Africans.

Balancing the legitimate concerns for justice here is well outside my zone of expertise. Some sort of public buyout program would seem an essential part of the package. For reasons already outlined, simply taking it from whites who inherited or even purchased the land legally would be not only unjust but destructive. But we can’t expect black South Africans to wait several generations to achieve a share of the economic pie commensurate with their population, either.